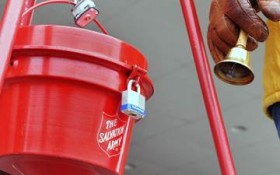 The Salvation Army says someone has placed a wedding band and a diamond engagement ring worth $3,500 in one of its holiday red kettles in Massachusetts.

The charity said Tuesday that the anonymous donation made last week in the town of Billerica, about 20 miles northwest of Boston, is reminiscent of a series of donations of expensive jewelry last winter.

Salvation Army officials called the rings “an incredible gift” that will help pay for food pantries, soup kitchens and other holiday outreach to the needy.

Last December, a widow’s donation of her wedding and diamond engagement rings in Boston touched off a wave of similar giving that wound up raising more than $30,000.

The Salvation Army says it hopes to raise $3.4 million in this year’s red kettle campaign in Massachusetts.