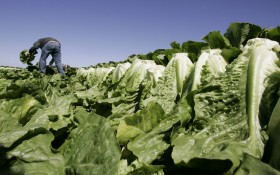 A warning to consumers – a potential source for a salmonella outbreak has been discovered. According to the Associated Press, Dole Fresh Vegetables says it’s recalling some of its bagged spinach distributed in 13 states as a precaution after a random sample tested positive for salmonella.

The Monterey, California-based company says in a statement Monday that people who bought 8-ounce bags of Dole Spinach salad with a Friday expiration date and the codes A27409A and A27409B should throw it away.

It says no illnesses have been reported, and the recall doesn’t affect Baby Spinach or any of its other salads.

Symptoms of salmonella include fever, diarrhea, nausea, vomiting and abdominal cramps. The illness typically lasts four to seven days, but it can be deadly in those who are young, old or have compromised immune systems.