Ryan caving to liberals on abortion - The Horn News 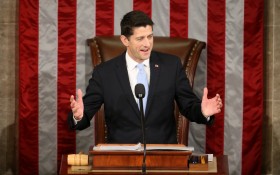 That didn’t take long. Only a week in office, and the newest Speaker of the House, Paul Ryan, R-Wisc., is already backing down from President Barack Obama.

In a recent interview with CNN’s “State of the Union”, Ryan was asked about fighting the President and defunding Planned Parenthood. Ryan said simply that it’s time for him and other Congressional leaders to be “honest with people up front about what it is you can and cannot achieve.”

“I think we need to be very clear about what we can and cannot achieve and not set expectations that we know we can’t reach given the constraints of the Constitution,” Ryan told to shows host Dana Bash.

In other words – He doesn’t think he’s capable of defeating the abortion provider… so he won’t bother trying.

Unfortunately for Ryan, the three dozen or so conservative hard-liners in the House who pushed out former Speaker John Boehner, R-Ohio, haven’t gone anywhere. Even though most of them ended up supporting newly elected speaker, they served notice that they will be watching closely to make sure he delivers on promises of a more inclusive legislative process.

As the Feb. 1 presidential caucuses in Iowa approach, the 2016 candidates in the Senate, including Ted Cruz of Texas, Rand Paul of Kentucky and Marco Rubio of Florida, could seize on the spending debate to stage fights on one issue or another.

But Senate Majority Leader Mitch McConnell, R-Ky., eager to hang onto his slim majority and protect vulnerable GOP senators up for re-election in politically divided states such as New Hampshire and Illinois, is also not interested in any more conflict.

Majority Republicans are trying to play down the possibility of unrest around the spending process, given that the bottom-line numbers have been set and policy fights are a regular feature of negotiations on spending bills. “It is the chairman’s expectation that we will have funding legislation that can pass the House and Senate and be signed into law,” said Jennifer Hing, spokeswoman for Rep. Hal Rogers, R-Ky., chairman of the House Appropriations Committee.