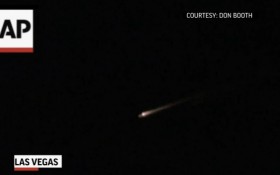 Military officials say a streak of light seen burning across the sky by people in three western states was debris from a Russian rocket re-entering the atmosphere.

U.S. Strategic Command spokeswoman Julie Ziegenhorn says the fireball seen over Arizona, Nevada and California in the Tuesday night sky was an SL-4 rocket body booster from Russia that was launched Monday.

Dozens of people took to social media to share videos and photos and marvel at the white fireball flying through the sky that some described as a shooting star. Others wondered if it was a meteor breaking up on re-entry or space debris from a fallen satellite.