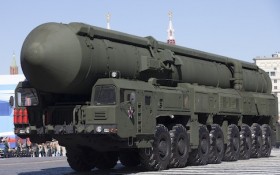 He said that Moscow will respond by developing “strike systems capable of penetrating any missile defenses.” Putin’s statement comes amid a severe strain in Russia’s relations with the U.S. and its NATO allies, which have plunged to the lowest point since the Cold War over the crisis in Ukraine.

For many years, the Kremlin has protested the U.S.-led missile shield, voicing concern that it could eventually become capable of intercepting Russia’s nuclear-tipped intercontinental ballistic missiles, thus eroding the strength of the nation’s nuclear deterrent.

Washington, in turn, has argued that the shield was aimed to fend off missile threats from nations such as Iran and North Korea and wouldn’t be capable of dealing with the massive Russian nuclear arsenal.

Putin argued Tuesday that the U.S. has kept working on the missile shield despite Iran’s deal with six world powers that has curbed its nuclear program in exchange for relief from international sanctions.

“So, references to the Iranian and the North Korean nuclear missile threat just have served to cover up the true plans, and their true task is to neutralize nuclear potential of other nuclear powers, … Russia in particular,” Putin said.

Putin added that in the future Russia may also work on the development of its own missile defense systems, but will now focus primarily on commissioning new strike weapons. He said that Russian arms makers already have built and tested prospective weapons systems, which entered combat duty this year.