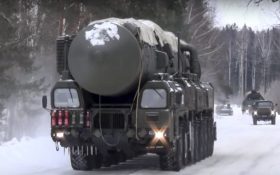 Those types of nuclear-tipped ICBMs are mounted on heavy all-terrain vehicles, making it more difficult for an enemy to spot them. The ministry said the drills are being conducted across a vast area from the Ivanovo region just northeast of Moscow to the Irkutsk region in eastern Siberia.

It said the exercise will focus on the deployment of missiles and fending off possible attacks by enemy scouts, but will not involve practice launches.

The maneuvers are the latest in a steady series of Russian military drills. Russia’s armed forces have intensified their combat training amid tensions with NATO over Ukraine.