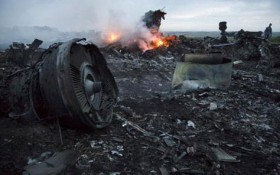 When Malaysian Airlines flight MH17 was shot down in July of 2014, the Russian government was immediately suspected as the culprit.

Now, according to Ukrainian authorities, Russia was so desperate to cover-up their involvement in the downing of the civilian aircraft, they were willing to try anything — even assassination.

Ukraine’s chief military prosecutor, Anatoliy Matios, said Monday the country had arrested “the killer who attempted to murder the chief expert on the case of the downed Malaysia Airlines Boeing 777” in Nov. 2015.

Last year one of the chief forensic scientists investigating the cause of the crash, Oleksandr Ruvin, 56, was shot three times, and the brazen attack was immediately linked to his role in the criminal probe.

The assassin may lead straight back to Russian mobsters widely suspected of being loyal to President Vladimir Putin, according to the Ukrainian News Agency who said, “One of the investigation’s theories is that Ruvin’s murder was ordered by Russia.”

It was determined in Oct. 2015 by an international probe that MH17 was shot down by a Soviet-made Buk anti-aircraft missile launched from eastern Ukraine, controlled by rebels backed by the Russians.

The incident, which claimed the lives of 298 passengers and crew, led to Europe’s flight safety authority to call for better, quicker and broader information-sharing about possible risks to aircraft passing over combat zones.

The Cologne-based European Aviation Safety Agency said that “airlines have expressed a need for a consolidated picture of the safety/security situation” and have “vastly different resources available to them.”

EASA urged EU nations to establish national systems for addressing risks to civil aviation over combat zones, which EASA would then distribute. It said intelligence agencies should contribute information, as well as the airlines themselves.

The proposal was given to the Dutch presidency of the European Council in March.