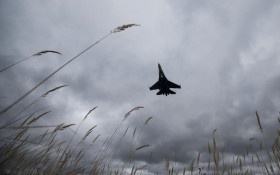 Earlier this week Russian President Vladimir Putin said, “To forgive the terrorists is up to God, but to send them to him is up to me.”

And it looks like he means what he says.

According to reports out of Syria, human rights activists are complaining the Russian air force is using a banned chemical weapon — white phosphorus bombs — to literally scorch ISIS members (and whoever else gets in the way) alive.

White phosphorous is a chemical that burns at extreme temperatures when exposed to the oxygen in our atmosphere, and the fire it creates cannot be put out with water.

As such, it is considered illegal under international law to use it as a direct weapon against individuals. Burning phosphorus will eat through skin, bone, and even steel.

The chemical – also known in the US military as ‘willie pete’ or ‘whiskey papa’ – instead is restricted to being used to create smoke screens, or to destroy vehicles and military equipment.

But human rights groups are claiming that the Russians are using white phosphorous to kill and terrorize individuals. They point out that the white phosphorous bombs are being dropped at night, when a smoke screen wouldn’t be necessary.