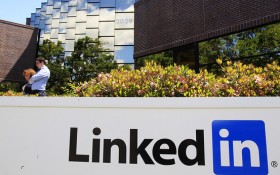 Business-focused social network LinkedIn faces being blocked in Russia after a court ruled it broke a law on data storage.

The Moscow city court rejected LinkedIn’s appeal against a ruling that it had broken a law that requires personal data on Russian citizens to be stored on servers within Russia, court spokeswoman Ulyana Solopova told The Associated Press.

Solopova says LinkedIn can appeal Thursday’s ruling. The case was brought by Roskomnadzor, the Russian state telecommunications and media regulator.

LinkedIn’s website was still accessible on Moscow internet connections as of Thursday afternoon, though Roskomnadzor representative Vadim Ampelonsky told the Interfax news agency that LinkedIn would be blocked as soon as the agency received the full text of the court’s ruling, likely next week.

“‘LinkedIn’s vision is to create economic opportunity for the entire global workforce,” the company said in a statement. “The Russian court’s decision has the potential to deny access to LinkedIn for the millions of members we have in Russia and the companies that use LinkedIn to grow their businesses. We remain interested in a meeting with Roskomnadzor to discuss their data localization request.”

Russia’s main antitrust regulator, the Federal Anti-Monopoly Service, also announced Thursday it had opened a case against Microsoft, which is in the process of concluding a $26 billion acquisition of LinkedIn.

The FAS said Microsoft was accused of abusing a dominant market position by failing to give enough time for anti-virus developers to adapt to the Windows 10 operating system, allowing them a matter of days rather than the two months allowed previously. The FAS argues that gave an unfair advantage to Microsoft’s own Windows Defender, anti-virus software built into the operating system, and hurt competitors including Russia’s Kaspersky Lab, which filed a complaint to the regulator.

“Such actions lead to an unjustified advantage for Microsoft in the program market. Our task is to ensure equal conditions for all participants in this market,” FAS deputy head Anatoly Golomolzin said in a statement.

Kaspersky spokeswoman Yulia Shlychkova said the company was also preparing a complaint to be sent to the European Commission.

Company founder Eugene Kaspersky accused Microsoft of trying to drive anti-virus software makers out of the Window market, adding in a blog post that “a dominating antivirus is a security threat in and of itself.”