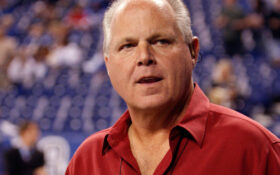 The late Rush Limbaugh can never, ever be equaled.

But there’s no question Limbaugh’s death in early February has left a huge hole in the world of conservative talk radio.

In recent weeks, there are a number of conservative activists and stars vying to replace him in the coveted 12 p.m. to 3 p.m. Eastern timeslot he previously occupied.

The first to make a major move on the Limbaugh timeslot is conservative activist Dan Bongino. The former secret service agent turned podcast host announced that he was close to signing a major, multi-year deal with Westwood One radio.

His show will occupy the 12 p.m to 3 p.m Eastern timeslot previously held by Limbaugh for 30 years.

The deal is not expected to impact Bongino’s popular podcast, and he would continue to appear on television as a Fox News Channel contributor.

“The move would result in affiliates across the country airing Bongino’s radio show in a time slot that was held and essentially owned by Rush Limbaugh for decades,” OutKick reported. “Limbaugh’s syndicator, Premiere, has not yet decided what show it will offer affiliates moving forward from 12-3. Cumulus Media owns Westwood One but had carried Limbaugh’s program on various affiliates.”

Since his death, the Rush Limbaugh show has been hosted by a rotating cast of conservative radio hosts that used prior clips of Limbaugh to keep his radio talk show largely unchanged.

Limbaugh died Feb. 17, a year after announcing he had lung cancer.

The fiery Limbaugh was a leading voice of the Republican Party and conservative movement for decades with a daily radio show that was broadcast on more than 600 U.S. stations for more than 30 years.