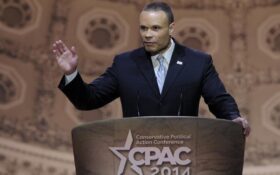 No good deed goes unpunished — and nobody knows that like Dan Bongino.

Bongino is known nationwide for his feisty appearances on Fox News’ Hannity.

Bongino hosts his own weekend Fox News opinion show, Unfiltered with Dan Bongino… and boy, does he make that show live up to its name. He invites Democratic spokespeople to make their case on his show, and then he absolutely owns any clueless liberal who gets on the other side of the screen.

He even has his own news website, The Bongino Report, which fills the gap left by The Drudge Report’s drift away from conservative principles.

And now, he has three hours a day.

After this February when we lost the undisputed greatest talk radio host in history, Rush Limbaugh, several people tried to host a radio show to continue his work. A month later, Dan Bongino started his own show. It airs from noon to 3, just like Rush… and it’s been a huge success.

That really ticks off the media, which are going out of their way to try and silence the conservative star.

Bongino has been in a two-month-long fight with his radio network over its COVID-19 vaccine mandate.

In October, Bongino called out Cumulus Media for requiring employees to get the injection or get ejected from their jobs.

Bongino tried to protect the little guy by saying it was wrong to force people to choose between vaccination and unemployment.

He told Cumulus, you’re going to have to choose: You can have my radio show and its huge audience, or you can keep the vaccine mandate.

“You can have me, or you can have the mandate, but you can’t have both,” he said on Oct. 18. “Cumulus is going to have to make a decision with me if they want to continue this partnership, or they don’t. I want something to change, and I’m giving them an opportunity to do it. But if they don’t, this is going to be an entirely untenable situation going forward.”

Then, Bongino pulled the plug on his own successful radio show.

He walked away from the show for a week and a half—no guest hosts, no new segments. The network had to air reruns of the show.

But in November, Bongino was back behind the microphone, even though Cumulus hadn’t give up the vaccine mandate yet.

People have asked, “What gives?”

The Washington Post is going out of its way to get Bongino.

The Post ran a story calling Bongino’s threats against the network a “stunt,” and a “cynical ploy,” because he didn’t quit.

Cumulus is so massive that even pulling every dollar of funding he rakes in for the network wouldn’t hurt it. It just has too much cash in reserves.

The network’s chief financial officer told a group of high-dollar investors recently that, even if the network lost Bongino, it would be “really not material” to the company’s financial health.

Rather than follow through and quit over the vaccine mandate, Bongino decided to return to work for the sake of his employees. “I have numerous employees who work on my show too. I have to protect them,” he told the Post.

Although he says he’s “not optimistic” the network will ever change its overall mandate, he’s trying to get the network to agree not to fire some of his team members.

That won’t stop The Washington Post from attacking. Jeff Bezos’ newspaper requires all its employees to be vaccinated. It only goal is embarrassing Bongino and trying to convince the high-rated host of shutting himself up.

In the war of the Post against Bongino, we’re with Bongino… because he’s fighting for us.