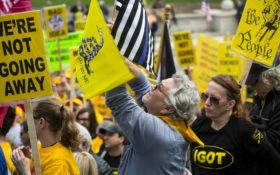 Several rural Illinois counties have taken a stand for gun rights by co-opting a word that conservatives associate with a liberal policy to skirt the law: sanctuary.

At least five counties recently passed resolutions declaring themselves sanctuary counties for gun owners — a reference to so-called sanctuary cities such as Chicago that don’t cooperate with aspects of federal immigration enforcement.

The resolutions are meant to put the Democratic-controlled Legislature on notice that if it passes a host of gun bills, including new age restrictions for certain weapons, a bump stock ban and size limit for gun magazines, the counties might bar their employees from enforcing the new laws.

“It’s a buzzword, a word that really gets attention. With all these sanctuary cities, we just decided to turn it around to protect our Second Amendment rights,” said David Campbell, vice chairman of the Effingham County Board. He said at least 20 Illinois counties and local officials in Oregon and Washington have asked for copies of Effingham County’s resolution.

County officials fear their state legislators won’t be able to stop the passage of the gun restrictions because they are outnumbered by lawmakers from in and around Chicago, where the vast majority of the more than 650 homicides last year involved guns.

Co-opting the sanctuary title is also a way of drawing attention to the rural-urban political divide that was so stark in the last general election, when “downstate” areas of Illinois backed Donald Trump, who remains popular with those voters, while the Chicago backed Hillary Clinton, who grew up in the suburbs.

“We’re just stealing the language that sanctuary cities use,” explained the Effingham County’s top prosecutor, Bryan Kibler, who came up with the idea.

Not lost on them is that lawmakers from Chicago were instrumental in turning Illinois into what they derisively call a “sanctuary state” by passing recent legislation that prohibits local law enforcement from arresting or detaining people based solely on their immigration status. Republican Gov. Bruce Rauner signed it into law.

“They are trying to make a point that they really resent how the city of Chicago treats the rest of the state and how they’re treated as gun owners,” said Richard Pearson, executive director of the Illinois State Rifle Association.

The resolutions are largely symbolic — a way for communities where guns are cherished and where hunting is a way of life to make the point that they view most restrictions on guns to be unconstitutional.

“We wanted to … get across that our Second Amendment rights are slowly being stripped away,” Kibler said.

“It’s like a warning shot across somebody’s bow,” said Workman, who knows of one other place, Oregon’s Deschutes County, that is looking at doing something similar to the Illinois counties. “If you’ve got four or five counties telling Chicago something, that’s significant.”

Such talk worries Kathleen Willis, a Democratic state representative from suburban Chicago who sponsored some of the gun legislation.

“I don’t think you can say, ‘I don’t agree with the law so I won’t enforce it,’” she said. “I think it sends the wrong message.”

Kibler, though, said he thinks the resolutions send the same message that cities like Chicago send by refusing to cooperate with federal immigration authorities. He said he won’t speculate about how he’d deal with new gun restrictions that haven’t been signed into law, but that legislators need to understand, “If you pass it we might not pay attention to it.”

Kibler pointed out that prosecutors already have a lot of discretion and cited an example in which he gave a gun owner a break. He dismissed charges against a man after police found a gun in the car he’d driven from Mississippi, where it is legal to carry guns openly, to Illinois, where it’s not.

“The guy had no (criminal) history and he had it on the side of the front seat of his car in a sack, so I dismissed it,” he said.