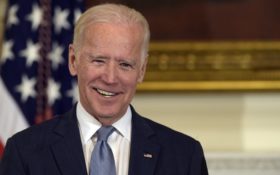 But it was what the former New York City mayor said about Joe Biden’s mafia connections that completely stunned viewers.

Giuliani said Biden’s mafia connections were trying to kill him to cover-up their crimes — but if they couldn’t assassinate him, the media wasn’t going to “kill” his story either.

Henry asked Giuliani if he was scared of the Democrats’ anti-Trump investigations.

“Are you afraid, Mr. Mayor, that you could be indicted?” Henry asked.

“Oh, wow, how long have you known me, Ed?” Giuliani shot back.

“I did the right thing,” he said. “I represented my client in a very effective way. I was so effective, I’ve discovered a pattern of corruption that the Washington press has been covering up for three or four years.”

“You should have jumped all over this in 2015 when this awful conflict was mentioned,” Giuliani said. “It was hidden and suppressed by the Washington press!”

“The reality is… I’m embarrassing you because you didn’t do your job,” he continued. “I’m also going to bring out a pay-for-play scheme in the Obama administration that will be devastating to the Democratic Party.”

That’s when he dropped a bombshell and said that Biden-connected mafia hitmen were trying to silence him.

“I expected, the moment I heard Biden’s name, I told my colleagues, they’re going to try to kill me,” Giuliani warned.

“Because they’re going to kill the messenger,” he said.

“But damn it, the mafia couldn’t kill me, your colleagues are not going to kill me.”

“The Wall Street Journal reported that you were going to personally profit from a natural gas pipeline in Ukraine,” Henry said.

“I can’t keep up with the amount of false information printed about me,” the White House lawyer said.

Giuliani claimed it’s part of a conspiracy in the liberal media to destroy him because he represents Trump.

“Let me make it clear: I have no business interest in … Ukraine,” he said.