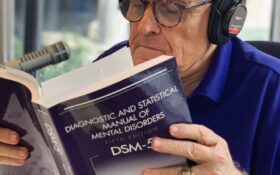 Giuliani is working on a “major exposé” — and it’s a reveal that he says will completely rock the 2020 election.

You can see that photo below:

“Currently doing research on a major exposé,” he wrote. “This will completely shake the 2020 Presidential election. Stay tuned.”

Giuliani is clearly taking a page out of the GOP playbook against Biden by amplifying doubts about the Democratic presidential nominee’s mental facilities.

At best, top GOP leaders contend that Biden is on the cognitive decline with a noticeable stuttering problem any time he’s on national television.

At worst, they claim he’s completely lost his mind and is unfit to even debate President Donald Trump.

It’s unclear whether Giuliani was simply “triggering” liberals with the photo, or if he was actually serious.

What is clear is that Giuliani was reported to have accidentally tweeted a Google search to his account.

One of those times when the question answers itself #dementia @RudyGiuliani pic.twitter.com/vvjthTbjMk

Critics buzzed around the social media post, speculating about Giuliani’s choice of words.

Best Water To Drink In The AM  [Sponsored]

Many dismissed it as a mistake.

But perhaps the former NYC mayor has something serious brewing ahead of November 2020.