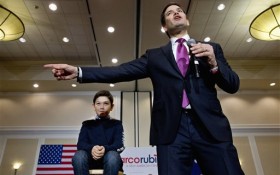 Facing the biggest test of his presidential bid, Marco Rubio promised a more aggressive approach in what his team expects to become an extended Republican nomination fight that could result in a brokered national convention.

“I don’t need to start these fights, but if someone starts one in the future we’re going to have to point out the differences in our records in a sharper way,” Rubio told reporters Wednesday aboard his charter flight from New Hampshire to South Carolina. “I don’t think we have the luxury any longer to basically say look, ‘I don’t want to argue with Republicans.”

The comments came after a disappointing 5th-place finish in New Hampshire’s presidential primary. The poor result was a reflection, he said, of a high-profile stumble in Saturday night’s debate that pushed undecided voters toward other candidates.

And as he shifts his attention to South Carolina’s Feb. 20 contest, the 44-year-old freshman senator wants voters to know he’s learned an important lesson from his experience in New Hampshire. Instead of trying to avoid attacking his GOP rivals on the debate stage, Rubio said he’s now prepared to fight back when necessary — particularly with his party’s front-runner Donald Trump.

“The hard thing about Donald in the short-term is he doesn’t have any policy positions,” Rubio said. “He tells you what he’s going to do, but he won’t tell you how he’s going to do it. I think once this race narrows, the pressure will be on him.”

New Hampshire destroyed any momentum Rubio had coming out of Iowa and for now, at least, locks Rubio in a messy muddle in his party’s establishment wing. Both Ohio Gov. John Kasich and former Florida Gov. Jeb Bush beat Rubio in New Hampshire in the contest to emerge as the mainstream alternative to Trump and Texas Sen. Ted Cruz.

Rubio’s senior team concedes the New Hampshire setback will extend the Republican nomination fight for at least another three months, if not longer.

“We very easily could be looking at May — or the convention” in July before there’s a “functional nominee,” Rubio campaign manager Terry Sullivan said in a brief interview with The Associated Press. “I would be surprised if it’s not May or the convention.”

There hasn’t been a contested national convention since 1976, yet Republican National Committee officials have already had preliminary discussions about the possibility of no candidate securing a majority of delegates in the state-by-state primary contests.

It’s by no means assured that Rubio’s candidacy will survive that long.

Despite his popularity among many Republican leaders, he will ultimately need to start winning primary contests to remain competitive — especially as Trump and Cruz perform well. Sensing weakness, Democrats and Republicans alike have begun to pounce on questions about Rubio’s long-term viability.

“He will obviously need to do well in South Carolina or he will have a hard time continuing on,” said Steve Duprey, a Republican national committeeman from New Hampshire. “I think he can do it.”