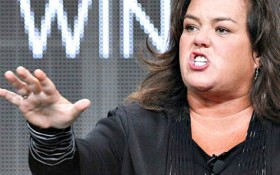 Outspoken liberal celebrity Rosie O’Donnell didn’t have a very Merry Christmas. While the rest of America was gathered around the yule log or heading to church, Rosie spent her time cursing at conservative politicians.

That is, until Rev. Franklin Graham shut her down with an epic response.

At the end of each year, no matter how short—or long—it may feel, there is always Christmas. Waiting for us is that sense of wonder the shepherds felt when the angels appeared in the night sky to herald the birth of a Savior. pic.twitter.com/oFdj7EIyzS

How did liberals react?

By claiming Ryan — and other conservatives — are going straight to hell.

paul ryan – don't talk about Jesus after what u just did to our nation – u will go straight to hell u screwed up fake altar boy #JUDASmuch https://t.co/gJ8VreyxAX

It was so nasty, Rev. Franklin Graham had no choice to be weigh in on the statement.

His response was jaw dropping, and Rosie was left with no immediate reply —

.@Rosie O’Donnell is back in the news today for going after @SpeakerRyan on Twitter after he posted a Christmas video message honoring the birth of Jesus Christ. Among other things, she told Speaker Ryan he was going “straight to hell.” https://t.co/xgdmA3XRE4

.@Rosie doesn’t have the keys to hell—but I know the One who does! And I can tell you who will be there. Hell is going to be filled with people who rejected God’s offer of salvation and turned their backs on His laws and standards, refusing to repent. https://t.co/QzWemh85OI

I hope @Rosie will put her faith and trust in Jesus Christ. Only He can heal hearts and forgive our sins. Do that today—you’ll never regret it. https://t.co/QzWemh85OI