Ron DeSantis given major award by... Philadelphia!? - The Horn News 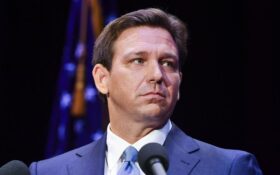 When Florida Gov. Ron DeSantis was running for re-election last year, he became set to receive the Thomas Jefferson Gold Medal from the Philadelphia’s Union Club.

Three months later, DeSantis arrived in Philadelphia Monday night to accept the award… and local liberals aren’t happy and are demanding the award be cancelled.

State Sen. Vincent Hughes, a Democrat, told ABC 6, “Why are you promoting this individual who, in their philosophy, sees so many people, Black and brown folks, LGBTQ+ folks, as secondhand citizens?” Hughes presumably meant “second-class” citizens.

“We want you to cancel this award and more importantly we’re putting The Union League on notice,” Philadelphia Councilmember Kenyatta Johnson, a Democrat, said according to CBS News.

The Florida governor had recently rejected a proposal for an Advanced Placement Course in African American studies. His office told CNN that it took issue with the inclusion of politicized topics like reparations and the idea that America is controlled by white supremacists.

Some Philadelphians defended DeSantis against these attacks.

Republican Aaron Bashir, a ward-level activist, told ABC 6, “Whenever you’re trying to come up with something, they always attack you as a racist person, as a person who does not support minority rights. It’s insane.”

Florida sits about 800 miles away from Pennsylvania, but the Sunshine State seems to loom large in the imagination of Pennsylvania Republicans.

“Our goal is to make Pennsylvania the Florida of the north,” Republican Doug Mastriano reportedly said at a diner last year, during his failed campaign for governor.

The Union Club has long maintained ties to the national Republican Party. The club was founded in the 1860s to support the Union during the Civil War, and it gave Abraham Lincoln its first gold medal.

In the intervening years, George H.W. Bush won the gold medal in 1987, during his vice presidency. Jeff Sessions won the award in 2018 while serving as former President Donald Trump’s attorney general.  Even former Defense Secretary Donald Rumsfeld received an honor at one point.

The union club is a nonprofit, not a state actor. However, the club fills some roles normally associated with the public sector, like providing education about Philadelphia’s history.

Some activists were calling for a boycott of the Union Club.

“We challenge those who are members of the Union League to take a hike,” Hughes said, according to NBC 10. “To take a walk. To take to somewhere else. To join some other club or to use your money that’s being put into this club to some greater use to benefit the people of this city.”

Ron DeSantis is in Philly tonight to accept the Union League of Philadelphia’s Gold Medal, which was first awarded to President Lincoln.

It led to protests outside of their headquarters on Sansom Street in Philly.
pic.twitter.com/bRAjPBwrHd