Mitt Romney makes headlines... for all the wrong reasons - The Horn News 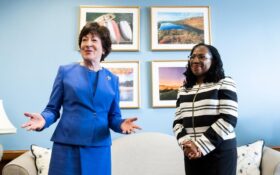 Last week, the Senate finished its confirmation hearings for Supreme Court nominee Ketanji Brown Jackson — and the Senate may have already mustered enough votes to end debate, hold a vote, and confirm Jackson to the court.

However, Jackson is still waiting on a swing vote, one that could prove critical. Jackson, like the rest of the nation, is waiting on Sen. Mitt Romney, R-Utah.

The Senate needs 51 votes to confirm a Supreme Court nominee, with the vice president casting a vote in the event of a 50-50 tie. In today’s 50-50 Senate, Romney may become the 51st vote needed to confirm Jackson without any involvement from Vice President Kamala Harris.

Granted, no Democrats have come out against Jackson, and one Republican — Sen. Susan Collins of Maine — committed to voting for Jackson, according to a statement obtained Wednesday by CBS News.

However, swing voter Sen. Kyrsten Sinema, D-Ariz., has yet to say which way she’s leaning.

Due to Collins’ support and Sinema’s silence, the nation is watching Romney, who conservatives have often criticized for being a “RINO” — Republican In Name Only.

Like Collins, Romney met with Jackson on Tuesday. He plans to keep his decision hidden until “the day of the vote.”

“After I’ve made a decision as to what I’m going to do on this vote, you’ll see it,” Romney told reporters Tuesday. “But that’s probably not until the day of the vote itself.”

In a statement obtained by CNN, Romney discussed the meeting’s “wide-ranging discussion about her experience and qualifications.”

“She’s a very impressive person. She’s intelligent, capable, she’s a lovely person as well and I think a great deal of her,” Romney later told CNN. “But delving into differences on judicial philosophy and her approach to the law is something that I’m going to keep working on.”

If Jackson earns the 51st vote from Romney, then she will avoid the spectacle of being confirmed by the vice president, an unprecedented act for a Supreme Court nominee. The Democrats would likely tout Jackson as a bipartisan choice.

Some swing senators, like Collins, have endorsed Jackson. For example, Sen. Joe Manchin, D-W.Va. committed to voting for Jackson in a statement.

Other swing senators, like Romney and Sinema, have remained silent.

For example, Sen. Lisa Murkowski, R-Alaska, voted last year to confirm Jackson to the federal court of appeals for D.C., but she has refused to answer any questions about the Supreme Court. When faced with questions, she has simply mentioned her prior support for Jackson, according to The New York Times.

Still, others have voiced more negative views on Jackson.

Sen. Lindsey Graham, R-S.C., also voted to confirm Jackson to the lower court, but he has since voiced a lower opinion of her on Twitter, describing her nomination as an instance of Biden pandering to the radical Left.