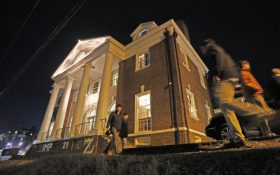 For the first time since Rolling Stone magazine’s shocking story about a brutal gang rape at the University of Virginia hit shelves two years ago, the public may hear from the young woman at the center of the now discredited article “A Rape on Campus.”

A defamation trial against the magazine is set to begin on Monday over the November 2014 article about the woman identified only as “Jackie” and her harrowing account about being gang raped in a fraternity initiation. University administrator Nicole Eramo, who counseled Jackie and claims the story cast her as its “chief villain,” is seeking $7.85 million.

Jackie was forced to answer questions about the case in April, but her comments have been kept under wraps. Now, Eramo’s attorneys have said they intend to call Jackie as a witness at trial, although it’s possible the jury will watch a video of her deposition instead of hearing from her in person. An attorney for Jackie declined to comment.

The story described in alarming detail Jackie’s account of being raped by seven men at the Phi Kappa Psi fraternity house in September 2012. Eramo’s attorneys claim the article portrayed her as indifferent to Jackie’s plight and only interested in protecting the university’s reputation. After it was published, Eramo, who then served as associate dean of students, received hundreds of emails and letters calling her a “wretched rape apologist” and “disgusting, worthless piece of trash.” Eramo still works for the university, now in a different administrative role.

An investigation by Charlottesville police found no evidence to back up Jackie’s claims and details in the lengthy narrative did not hold up under scrutiny by other media organizations. Rolling Stone officially retracted the story in April 2015. Since then, three lawsuits have been filed against the magazine. A judge earlier this year threw out one case brought by three fraternity members, but a $25 million lawsuit filed by the Phi Kappa Psi fraternity at UVa is scheduled to go to trial late next year.

Eramo’s trial will focus heavily on whether Rolling Stone editors and the article’s author, Sabrina Erdely, acted with “actual malice,” meaning that they knew what they were writing about Eramo was false or at least should have known it wasn’t true. U.S. District Judge Glen Conrad ruled in September that Eramo should be considered a public figure, which means she must prove actual malice in order to get certain monetary damages.

“A lot of this case is already decided,” said Lee Berlik, a Virginia libel attorney. “The big unknown really is how much damage did Ms. Eramo suffer to her reputation, what is that worth and I guess, most importantly, did Rolling Stone know what it was writing was untrue or should it have known?”

Eramo’s attorneys claim Erdely purposely avoided information she feared might ruin her preconceived narrative about how schools treat sexual violence victims while ignoring numerous red flags about Jackie’s credibility. Among other things, Jackie didn’t provide Erdely with the full names of the men she claimed attacked her and they were never interviewed for the story.

“Ms. Eramo’s legal team is looking forward to presenting the overwhelming evidence showing that Sabrina Erdely and Rolling Stone knew that what they published about Ms. Eramo was false and defamatory,” Libby Locke, an attorney for Eramo, said in an email. Locke said Eramo was not available for an interview.

Rolling Stone’s lawyers counter that Erdely had no reason not to trust Jackie, but stress that the young woman’s credibility isn’t the issue in the case. Rolling Stone attorneys argue in court documents that they still believe their reporting about Eramo and the university’s handling of sexual assault reports is “accurate and well substantiated.” Rolling Stone points to a U.S. Department of Education investigation that found last year that that UVa failed to promptly respond to some sexual assault complaints and created a “hostile environment” for victims.

“Dean Eramo’s lawyers are attempting to shift the focus of her lawsuit in the media to Rolling Stone’s reporting errors surrounding Jackie,” Rolling Stone spokeswoman Kathryn Brenner said in an email. “The depiction of Dean Eramo in the article was balanced and described the challenges of her role. We now look forward to the jury’s decision in this case,” she said.

The jury is expected to view hundreds of pages of documents, including Erdely’s reporting notes, emails between Erdely and her sources and audio recordings of Erdely’s interviews with Jackie. The judge recently ruled that Eramo’s attorneys won’t be able to show the jury a video of Erdely’s deposition because they violated court rules by leaking it to ABC’s “20/20.”

In giving the green light last month for the case to proceed to trial, Judge Conrad said he believes a jury could reasonably conclude based on the evidence presented thus far that the magazine acted out of actual malice. He noted that the evidence suggests that several people told Erdely her portrayal of Eramo wasn’t accurate and that Erdely had reasons to question Jackie’s credibility.

Among other things, the judge pointed to Erdely’s apparent disbelief when Jackie told her that two other women were gang raped at the same fraternity. Erdely told Jackie that was “shocking,” according to her reporting notes.

“I don’t know the stats on gang rape but I can’t imagine it’s all that common? So the idea that three women were gang raped at the same fraternity seems like too much of a coincidence,” Erdely wrote.

“It happens a lot more often than people might think,” Jackie replied.