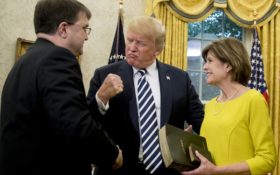 Robert Wilkie has been sworn in as the next secretary of Veterans Affairs.

President Donald Trump said Monday during an Oval Office ceremony that Wilkie will work day and night “to protect those who protect us.”

He also told Wilkie that hundreds of thousands of people are counting on him.

The former Pentagon official was selected to replace Secretary David Shulkin, who was fired amid ethics charges and internal rebellion at the department over the role of private care for veterans.

Wilkie was confirmed by an 86-9 vote in the Senate last week. He secured the backing of many Democrats after insisting he would not privatize the government’s second-largest department.

Wilkie says he is “humbled” by his selection.