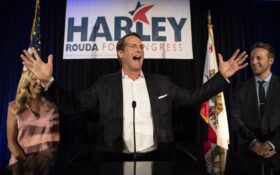 Rep. Harley Rouda, D-Calif. has told voters that a secure retirement is a “crucial part of the American Dream.”

The former Republican-turned-Democrat once said of Americans who work hard: “You deserve the opportunity to retire in peace, NOT bankruptcy.”

Like many politicians, though, Rouda’s words don’t match up with his actions.

The Washington Free Beacon reported that the lawmaker once ended retirement benefits from virtually all his employees when he owned an investment firm before his congressional bid.

The documents show that in 2015, Rouda wiped out 401(k) coverage for nearly everyone under him while he got rich. He was the CEO of Trident Holdings Company then — far from the Democratic seat he enjoys today.

And that is only half of the scandal.

Rouda also claims to be a big proponent of healthcare.

But when it came time for Rouda to put his money where his mouth was, he slashed healthcare for his employees when he was a real estate executive for a company owned by Trident Holdings.

It’s worth remembering that this is the same man who called healthcare a right for every American.

A former employee who spoke to Free Beacon alleged that this is nothing new with Rouda. “He does talk out both sides of his mouth,” they claimed.

Rouda wants healthcare for every single American… as long as you pay for it.