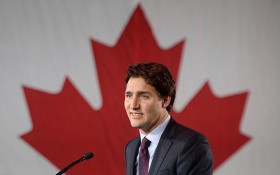 Is socialism on the rise in the Americas? Paralleling Bernie Sanders rise in the polls, Canadian leftists have dramatically altered their country’s political landscape by sending Justin Trudeau — the son of the country’s former socialist Prime Minister — to their highest office and ending nearly a decade of conservative leadership under Stephen Harper.

The victory in Monday’s election by Trudeau’s Liberal Party was stunning. The Liberals were on a path to win at least 184 seats out of 338 – a parliamentary majority that will allow Trudeau to govern as prime minister without relying on other parties. The Liberals received 39.5 percent of the overall vote compared to 32 percent for the Conservatives and 19.6 for the New Democrats.

Harper, one of the longest-serving Western leaders, will step down as Conservative leader, the party announced as the scope of the party’s loss became apparent.

Trudeau is the son of the late Prime Minister Pierre Trudeau, a former socialist leader who swept to office in 1968 on a wave of support dubbed “Trudeaumania.”

Trudeau channels the star power — if not quite the political heft — of his father. Tall and trim, he is a former school teacher and member of Parliament since 2008. At 43, he becomes the second youngest prime minister in Canadian history and has been likened to Obama.

Canada shifted to the center-right under Harper, who lowered sales and corporate taxes, avoided climate change legislation, and strongly supported the oil and gas extraction industry.

Harper said he had called Trudeau to congratulate him.

Trudeau’s opponents pilloried him as too inexperienced, but Trudeau embraced his boyish image on Election Day. Sporting jeans and a varsity letter jacket, he posed for a photo standing on the thighs of two his colleagues to make a cheerleading pyramid, his campaign plane in the backdrop with “Trudeau 2015” painted in large red letters.

Harper, 56, visited districts he won in the 2011 election in an attempt to hang onto them.

Former colleagues of Harper said he would be personally devastated to lose to a Trudeau, the liberal legacy he entered politics to destroy. Harper’s long-term goal was to kill the widely entrenched notion that the Liberals — the party of Pierre Trudeau and Jean Chretien — are the natural party of government in Canada, and to redefine what it means to be Canadian.