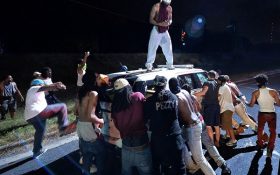 At least twelve police officers were injured in the bloody rioting, looting and vandalism that swept through Charlotte Tuesday night.

Authorities used tear gas to disperse angry rioters during the overnight anarchy in North Carolina’s largest city. Activists shut down a highway, smashed car windows, looted a Walmart and set multiple fires in response to the fatal shooting of a black man by police.

Authorities said the man was armed and posed a threat, and they acted in self-defense.

The protests broke out Tuesday after 43-year-old Keith Lamont Scott was fatally shot by a black officer at an apartment complex on the city’s northeast side. They continued into early Wednesday morning, when TV footage showed dozens of rioters on Interstate 85 looting semi-trucks and setting their contents on fire on the highway.

Tuesday night, a larger group of demonstrators gathered near the scene of the shooting. The Charlotte-Mecklenburg Police Department tweeted that demonstrators were destroying marked police vehicles and that approximately 12 officers had been injured, including one who was hit in the face with a rock. Photos and TV video showed police firing tear gas to break up the crowd. Some officers were in riot gear.

Five miles away, a mob of looters broke into a Walmart and reportedly stole televisions and other items.

Charlotte police officers went to the complex about 4 p.m. looking for a suspect with an outstanding warrant when they saw Scott — who was not the suspect they were looking for — inside a car, department spokesman Keith Trietley said in a statement.

Officers saw Scott get out of the car with a gun and then get back in, Trietley said. When officers approached, the man exited the car with the gun again. At that point, officers deemed the man a threat and at least one fired a weapon, he said.

Scott was taken to Carolinas Medical Center and pronounced dead.

Officer Brentley Vinson, who shot Scott, has been placed on administrative leave, which is standard procedure in such cases. Vinson has been with the department for two years.

Detectives recovered a gun at the scene and were interviewing witnesses, Trietley said.

Police blocked access to the area, which is about a mile from the campus of the UNC at Charlotte, as protesters gathered after the shooting.

Some protesters were heard yelling racially charged epitaphs, as well as phrases like “Black lives matter,” and “Hands up, don’t shoot!”

One television news crew retreated from the scene after demonstrators began rocking their remote van, which was parked near the apartment complex where the shooting occurred.

Rioters smashed at least one police car during the ensuing anarchy.