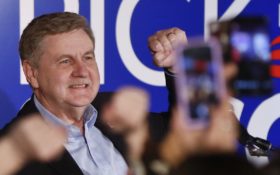 Democratic candidate Conor Lamb’s victory in a conservative congressional district in Pennsylvania this month raised eyebrows among political experts — and Republican leaders think the election could have been decided by three major, unexplained “irregularities.”

In a closely watched U.S. House race where Lamb clings to a slender lead in the longtime GOP stronghold friendly to President Donald Trump, reports say the GOP is prepared to sue the State of Pennsylvania to find out the truth.

Specifically, Republicans are preparing a lawsuit over reports of three unexplained events.

Reports on social media that a judge had cancelled the results has turned out to be untrue. However, complaints that Republican party lawyers were banned from observing the counting of some absentee ballots, voting machines erroneously recorded votes from Lamb, and voters were confused by misinformation from the state elections website are all considered credible by party leaders. The GOP will also demand a recount.

“We’re actively investigating [these] instances and we’re likely to file court action on them,” a Republican insider reportedly told The Washington Free Beacon.

Additionally, county officials reported to The Associated Press that they’ve received a letter from a law firm demanding that they preserve their records.

With the last batch of absentee ballots counted, Lamb, a 33-year-old former prosecutor and first-time candidate, saw his edge over Republican Rick Saccone shrink to 627 votes out of more than 224,000 cast, according to unofficial results.

Saccone, a 60-year-old Air Force veteran turned state lawmaker and college instructor, hasn’t conceded. Saccone’s campaign said that the candidate had no plans to concede before vote counting was finished.

Trump won the district by about 20 percentage points in 2016, and the seat has been in Republican hands for the past 15 years. It was open now only because Republican Rep. Tim Murphy, who espoused strong anti-abortion views, resigned last fall amid revelations that he had asked a woman with whom he was having an extramarital affair to get an abortion.

Democrats must flip 24 GOP-held seats this fall to seize control of the House.

A White House spokesman last week warned against reading too much into the razor-thin outcome, saying Trump’s campaigning for Saccone “turned what was a deficit for the Republican candidate to what is essentially a tie.”