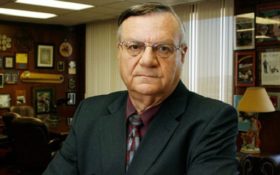 The political defiance that made Joe Arpaio popular and seemingly untouchable as metro Phoenix’s sheriff of 24 years ultimately led to his downfall — and it has some of his supporters openly questioning if his conviction was an act of political revenge.

Arpaio was convicted of a misdemeanor crime for ignoring a U.S. court order to stop traffic patrols that targeted immigrants Tuesday.

The TV interviews and news releases that the media-savvy lawman used over the years to promote his illegal immigration crackdowns came back to bite him through his conviction. The judge who found him guilty cited comments Arpaio made to the media during his term.

“Not only did defendant abdicate responsibility, he announced to the world and to his subordinates that he was going to continue business as usual no matter who said otherwise,” U.S. District Judge Susan Bolton wrote.

Bolton was appointed to her position by former President Bill Clinton, whose political party Arpaio was a frequent critic.

The verdict Monday marked a final rebuke for a sheriff who once drew strong support from such crackdowns but eventually lost his reelection bid last year.

Arpaio told The Associated Press that he didn’t have an immediate comment on the verdict, but his attorneys said they will appeal. The 85-year-old is set to be sentenced Oct. 5 and could face up to six months in jail, but attorneys who have followed the case doubt he would be incarcerated.

The sheriff had acknowledged prolonging his patrols for nearly a year and a half but insisted it was not intentional. He also blamed one of his former attorneys for not properly explaining the importance of the court order.

Bolton harshly rejected all Arpaio’s key arguments, saying the attorney had clearly informed him of the order and that a top aide also read part of it aloud to him during a staff meeting.

His lawyers contend the former sheriff’s fate should have been decided by a jury, not a Clinton-appointed judge. They also said Bolton violated Arpaio’s rights by not reading the decision in court.

“Her verdict is contrary to what every single witness testified in the case,” his lawyers said in a statement. “Arpaio believes that a jury would have found in his favor, and that it will.”

His defense had focused on what his attorneys said were weaknesses in the court order that failed to acknowledge times when deputies would detain illegal immigrants and later hand them over to federal authorities.

Unlike other local police leaders who left illegal immigration enforcement to politicians, Arpaio made hundreds of arrests in traffic patrols that sought out criminal illegals and business raids in which his officers targeted illegals who used fraudulent IDs to get jobs.

The efforts are similar to local immigration enforcement that President Donald Trump has advocated. To build his highly touted deportation force, Trump is reviving a long-standing program that deputizes local officers to enforce federal immigration law.