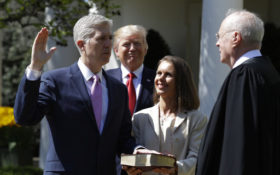 With Supreme Court justices living and serving longer than ever, the United States could face a crisis far worse than a judge who dies in office.

That, as the past year has shown, is something the country can handle.

But a judge who loses his or her mind in office? That’s another story!

Supreme Court justices can only be removed through death, retirement or impeachment – and given the divided nature of today’s Congress, removing a judge would be a monumental task.

Ruth Bader Ginsburg could literally go insane tomorrow and speak in tongues from the bench, and liberals would rally around her.

That might SEEM pretty out-there… but one look at the ages of our Supreme Court justices will show why this is a growing concern.

Historically, the average retirement age of the justices has been a tad over 78… and right now, three justices are in that zone: Ruth Bader Ginsburg (84), Anthony Kennedy (80) and Stephen Breyer (78).

Why is age so important?

The risk of mild cognitive impairment between the ages of 80 and 90 is 43.3 percent. Even worse, the risk of Alzheimer’s disease doubles every 5 years past the age of 65, according to the National Institute on Aging.

The fasting-growing age group for this disease is those over the age of 85.

Statistically speaking, given the rising ages of our justices, it is not only possible but also entirely likely that someone will serve on the court with at least some form of impairment.

They might not leap up and speak in tongues, but they could still end up making decisions based not on thorough knowledge of the Constitution and years of settled law, but bizarre whims and fancy.

Given some of the decisions the court has made lately, maybe that’s already happened!

As a result, retirement ages for Supreme Court justices could be one of the most urgent issues facing the nation right alongside health care, tax reform and border security.

Americans around the country – of both parties – already recognize that, which is why 33 states plus the District of Columbia have mandatory retirement ages for judges.

Others have plans that are similar in spirit; the Los Angeles Times editorial board in 2015 endorsed a single non-renewable 18-year terms for Supreme Court justices that would accomplish much the same thing as a retirement age.

Either option in theory would require an amendment to the Constitution, no easy task although in this case it might be a lot easier: For nearly two years now, the Supreme Court has had a higher disapproval rate than approval rate.

And in a Gallop poll last year, only 39 percent of Americans agreed that the court’s ideology is “about right.”

If the U.S. Supreme Court had a retirement age of 70, there would be three immediate openings, plus two more coming up shortly: Clarence Thomas (who turns 69 next month) and Samuel Alito (who just turned 67).
That would allow President Trump to name SIX dedicated constitutional conservatives to the court.

His first pick, the widely praised Neil Gorsuch, is just under the age of 50.

Making five more similar appointments would give the body a solid and unstoppable conservative majority that would last for a generation.