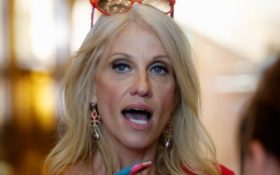 But all is not right in the Trump administration — and according to reports from insiders, the president-elect is furious at Conway’s recent public display of disloyalty.

The fight comes as Trump’s hunt for a secretary of state is veering into dramatic terrain, with the president-elect summoning Mitt Romney back for a second look — a move isn’t sitting well with Conway, who has begun leading a public pressure campaign against the pick.

Trump has a follow-up meeting Tuesday with the 2012 GOP presidential nominee. He also plans to sit with Tennessee Sen. Bob Corker, the chairman of the Senate Foreign Relations Committee. On Monday, Trump spent an hour with retired Gen. David Petraeus, a new contender.

Aides were divided over Trump’s choices, particularly the prospect that Trump could tap Romney for the top-tier diplomatic post.

In an unusual public airing of grievances, Conway on Sunday warned that the president-elect’s supporters would feel “betrayed” if he tapped Romney as secretary of state.

Trump is “furious” at Conway for her statements, according to MSNBC’s “Morning Joe”, who cited anonymous sources within the transition team.

While other staffing decisions were being made, the search for secretary of state was still underway. Petraeus said he spent about an hour with the president-elect and praised him for showing a “great grasp of a variety of the challenges that are out there.”

The former CIA chief pleaded guilty last year to a misdemeanor charge of mishandling classified information relating to documents he had provided to his biographer, with whom he was having an affair.

Pence, who is heading the transition effort, is said to be among those backing Romney for secretary of state. Romney was fiercely critical of Trump throughout the campaign but is interested in the Cabinet position, and they discussed it during a lengthy meeting earlier this month.

Other top Trump allies, notably Conway, have launched a highly unusual public campaign against a Romney nomination. Conway’s comments stirred speculation that she is seeking either to force Trump’s hand or give him cover for ultimately passing over Romney.

Trump is said to have offered Conway a choice of White House jobs – either press secretary or communications director. But people with knowledge of Conway’s plans say she is more interested in serving as an outside political adviser, akin to the role President Barack Obama’s campaign manager David Plouffe played following the 2008 election.

Trump was considering former New York City Mayor Rudy Giuliani to head the Homeland Security Department, according to those close to the transition process. Giuliani was initially the front-runner for secretary of state and is still in the mix. But questions about his overseas business dealings, as well as his public campaigning for the job, have given Trump pause.