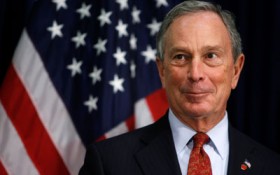 His entrance into the 2016 presidential race has long been speculated about — but now it appears inevitable.

According to reports, billionaire and former New York City Mayor Michael Bloomberg is close to announcing his plans to mount an independent campaign for president.

And Bloomberg’s plans may reveal that he’s harboring serious doubts about whether Hillary Clinton can win her party’s nomination, let alone the presidency. Bloomberg’s bid may be a desperate bid to try to stave off candidates like Vermont Sen. Bernie Sanders and Donald Trump who have thrown the 2016 race into chaos.

Bloomberg told The Financial Times on Monday — when he first publicly acknowledged his possible run — that he found the current presidential pool to be “an insult to the voters.”

But make no mistake about it — he’s not talking about Clinton.

Bloomberg’s fierce support for gun control has him squarely at odds with leading GOP candidates like Trump. And as an economic conservative, Bloomberg couldn’t be further from the Sanders camp.

But Bloomberg has expressed admiration for Clinton in the past, and the notion of him entering the race to derail her seems unlikely. Rather, he may view her campaign as dangerously on the ropes.

In a 2014 interview, Bloomberg actually encouraged Clinton to run for president, saying she would be a fantastic candidate for the Democrats. But after a too-close-for-comfort win in Iowa and an expected loss coming in New Hampshire, Clinton’s campaign has lost much of its shine.

Bloomberg’s aides floated the idea last month that the former mayor could fill a gap in the center of the political spectrum, and admitted that he is distressed by the rise of Donald Trump and Texas Senator Ted Cruz among Republicans and Vermont Senator Bernie Sanders among Democrats.

Bloomberg was a Democrat before becoming a Republican to run for mayor in 2001. He then became an independent.