REVEALED! The 2020 Democratic front-runner is... - The Horn News 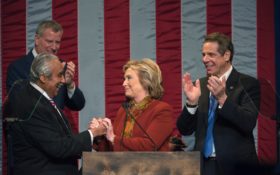 The 2018 mid-term elections have not happened yet… but that hasn’t stopped top Democrats from dreaming big. Already, top liberal leaders are getting their political ducks in a row so they can challenge Donald Trump in the 2020 presidential election.

In fact, one top Democratic insider (a personal friend of twice-failed presidential candidate Hillary Clinton and a member of her New York political cabal) has already emerged as a clear frontrunner for the Democrats.

New York City mayor Bill de Blasio secretly began his presidential campaign on Tuesday during a fundraiser in Iowa, the first primary caucus for the 2020 election.

While the name might not invoke fear among the average Trump voter, it gives chills to conservative leadership.

“This isn’t some nobody,” warned The National Review in 2016. “While conservatives want to ignore New York City, it’s a power hub of liberal politics. Bill de Blasio is going to haunt your politics for the next two decades, no matter where you live and regardless of whether you like it. There will be no tuning him and his progressive crusade out.”

De Blasio told a cheering crowd of liberals in Iowa that Democrats everywhere, even in rural Iowa, must embrace a progressive agenda to win elections and grab control of the government.

“We have to be uncompromising,” de Blasio told the group at the gathering in downtown Des Moines, where he stressed his work in New York City as an example for the rest of America. “We have to be strong. We’re the party of working people. We believe in the labor movement.”

However, de Blasio made similar points in a blog post last month, but his actual appearance in Iowa marked a more formal effort to seek a prominent role on the national stage. The location is no coincidence if the mayor’s 2020 plans put him in the White House, given Iowa’s status for first-in-the-nation presidential caucuses.

Organizers for Progress Iowa, a self-described liberal advocacy organization, estimated hundreds people showed up to hear the mayor speak at their annual fundraiser.

Still, it’s unclear how de Blasio’s message will resonate in Iowa. The mayor previously attempted to raise his profile in the state by launching a nonprofit group that tried to host a presidential forum in 2015. The event fell apart because there wasn’t enough interest from candidates at the time.

De Blasio acknowledged those previous efforts and expressed wanting to form another group to support progressive candidates. But he offered limited details. He also didn’t specify his future travels.

The visit for de Blasio also included some controversy from Democrats back home, latching on the opportunity to advance their own agendas. Unions representing New York City employees have been critical that de Blasio’s labor policies haven’t been generous enough and used his latest Iowa appearance to highlight those views.

The Transport Workers Union, which represents bus and subway employees, paid for a full page ad against de Blasio in the state’s largest newspaper, The Des Moines Register, and called him a “phony progressive” on social media.

Would you vote for Bill de Blasio