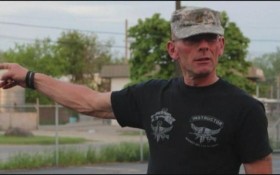 Was Lt. Charles Joseph Gliniewicz the most corrupt cop in America?

Months before this Illinois police officer staged his suicide to make it seem like he died in the line of duty, subjecting his community to an expensive and fruitless manhunt, he apparently sought a hit man to kill a village administrator he feared would expose him as a thief, a detective told the press on Thursday.

Det. Chris Covelli has revealed that Gliniewicz sent a text in April asking a woman to set up a meeting with a “high ranking gang member to put a hit on the village manager.”

Gliniewicz sent another message in May saying he had thought of “planting things,” which made more sense after investigators found small packages of cocaine in Gliniewicz’s desk after he died, Covelli said.

The drugs were “not linked to any case that we could find,” raising the possibility that the lieutenant sought to frame the manager, Anne Marrin, as a drug criminal before she could expose him as an embezzler, the detective said.

“We never found any explanation why those drugs were in his desk at the police station,” Covelli said.

Gliniewicz sent the texts after Marrin, the village’s first professional administrator, began auditing Fox Lake’s finances, including the Police Explorers program that authorities now say the lieutenant had been stealing from for seven years.

Marrin told reporters Thursday that she believed all her dealings with Gliniewicz were cordial and never had any sense that he was angry with her. She said she didn’t learn about the plots against her until after Gliniewicz’s death.

“It’s very unsettling. My concern is my family. It’s quite unbelievable and almost surreal,” she said, adding that police have assured her that she is safe.

Often called “G.I. Joe,” Gliniewicz was a well-known figure in the bedroom community of 10,000 people 50 miles north of Chicago. His death on Sept. 1, moments after he radioed that he was chasing three suspicious men, prompted an intense manhunt involving hundreds of officers, and raised fears of cop-killers on the loose.

Two months later, authorities announced that he in fact killed himself to cover up his theft of thousands of dollars from a youth program. Now authorities also are investigating his wife, Melodie, and son D.J., an official said Thursday.

Melodie Gliniewicz helped her husband run the Fox Lake Police Explorer Post, which put young people interested in law enforcement careers through sophisticated training exercises. In a newspaper interview weeks ago, D.J. Gliniewicz, an Army soldier in his 20s, angrily dismissed suggestions that his father took his own life.

A second official who was briefed on the investigation told the AP that Melodie and D.J. Gliniewicz were recipients of a separate set of incriminating text messages from the lieutenant that investigators released Wednesday when they announced the staged suicide.

The official also spoke on condition of anonymity because he was not authorized to discuss the investigation publicly.

The official said Melodie Gliniewicz was the person identified as “Individual #1” in the messages released Wednesday, who at one point suggests in a message that she and Joseph Gliniewicz may “need to hide the funds some how.”

The official said D.J. Gliniewicz was “Individual #2,” whom the officer appears to scold for spending money on personal items. In another message, the officer tells Individual #2 that he has thought through many scenarios involving Marrin, “from planting things to the volo bog,” a remote swamp in the area.

Authorities have refused to officially identify anyone beyond the lieutenant who is suspected in any crimes. They also declined to identify the woman Gliniewicz texted about the gang-hit in April, other than to say she is not in law enforcement.

Gliniewicz also appears to have had a troubled on-the-job history, ranging from numerous suspensions to sexual harassment allegations to complaints that he intimidated an emergency dispatcher with guns, according to personnel records released late Thursday by the Village of Fox Lake. Gliniewicz also had problems off the job, including one incident when a sheriff’s deputy found him passed out in his truck and took him home, only to have Gliniewicz report his truck stolen the next day, according to documents in the file.

Gliniewicz’s file revealed that he was racking up reprimands and suspensions for lying about being sick and giving motorists the wrong court dates on their traffic citations.

In 2003, a dispatcher complained Gliniewicz tried to intimidate her by bringing guns into the radio room after the two had a disagreement during which Gliniewicz allegedly told her he could put three bullets in her chest if she didn’t stop acting foolishly. A couple weeks later, the chief eliminated Gliniewicz’s job as commander of support services because of his “problems with the communications division.”

A letter in the file dated Feb. 1, 2009, addressed to then-Mayor Cynthia Irwin and signed only by “Anonymous Members of the Fox Lake Police Department” outlined complaints about Gliniewicz that included: allegations of an inappropriate relationship with a subordinate officer, complaints from bouncers at local bars for being drunk and belligerent, and allegations he allowed members of the youth program unsupervised access to the police department and to wear clothing labeled “police,” misidentifying themselves as officers.

As the probe into Gliniewicz’s death stretched on, suspicion grew that he had killed himself, but investigators publicly treated it as a homicide investigation until announcing Wednesday that he shot himself. The lieutenant fired first at his cellphone and ballistics vest, then inserted his handgun inside the vest and fired at his heart. According to the results of the investigation, he then fell forward as he was dying, scraping his face in what could have been an intentional effort to create the appearance of a struggle.

Marrin says she pressed Gliniewicz the day before his death to share an inventory of his program’s assets. He responded the next morning, promising to deliver it that afternoon.

Instead, he killed himself.

Just why he tried to make it look like murder remains unclear. Filenko said he didn’t know whether a suicide finding would prevent his family from receiving benefits.

The huge outpouring of grief in the 52-year-old officer’s village has been replaced by a sense of betrayal. Many tributes have come down. Some signs praising “G.I. Joe” have been replaced, one by a poster labeling him “G.I. Joke.”