Got him! Slain ISIS member was one of group's most powerful - The Horn News 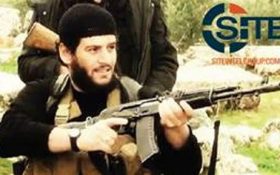 With the killing of Abu Mohammed al-Adnani, the Islamic State group lost one of its most powerful figures, a militant with multiple roles: A propaganda chief, overseer of spectacular attacks in Europe and a trusted lieutenant of the group’s top leader.

Al-Adnani was the mastermind of the extremist group’s strategy of lashing out abroad with attacks that overshadowed its battlefield losses in Syria and Iraq. He formed militant cells in Europe to carry out organized attacks and inspired “lone wolves” who struck out on their own.

Coming on the heels of the death of the group’s war minister, al-Adnani’s loss is likely to prompt a shake-up in the IS leadership and may force its shadowy leader, Abu Bakr al-Baghdadi, to address the loss of its most charismatic figure.

“Only al-Baghdadi is a more important leader, and al-Adnani was probably positioned to succeed al-Baghadi if he was killed,” Thomas Joscelyn, a researcher with the U.S.-based Foundation for the Defense of Democracies, said in an email to The Associated Press.

In a statement announcing his death, IS described al-Adnani as a descendent of Prophet Muhammad’s family and tribe, attributes also used to describe al-Baghdadi.

Still, both the Islamic State group — and its forerunner, al-Qaida in Iraq — have overcome past leadership losses, said Joscelyn, editor of the Long War Journal.

News of al-Adnani’s death sparked conflicting claims from Washington and Moscow over who targeted him. Russia said Wednesday it killed him along with 40 other militants in a strike in the northwestern Syrian city of Aleppo.

Washington said al-Adnani was targeted by a U.S. airstrike on the nearby city of al-Bab, though U.S. officials were still confirming his death.

The IS-run Aamaq news agency announced Tuesday that al-Adnani was “martyred while surveying the operations to repel the military campaigns in Aleppo.” It didn’t provide details.

A U.S. defense official said al-Adnani was believed to have been hit as he was getting into a vehicle in al-Bab, an IS stronghold in Aleppo province that is targeted by American- and Turkish-backed fighters in the push against the extremist group. The official spoke on condition of anonymity to discuss intelligence information.

The Soufan Group, a Washington-based consultancy firm that monitors IS activities, said that if confirmed, al-Adnani’s death would be one of IS’s “most significant personnel losses.”

“The death of al-Adnani could blunt the group’s siren song to terror, both directed and inspired,” the Soufan Group said, though it cautioned that al-Adnani’s death is unlikely to bring a halt to IS attacks abroad. IS has already had plenty of time to put plans in place for further strikes, it said.

As a main recruiter of foreign fighters, al-Adnani is believed to have planned and put in action attacks such as the November 2015 Paris attacks that killed more than 100 people. He is also believed to have directed the attacks on the Brussels and Istanbul airports, and the bloody hostage attack in Bangladesh.

The downing of a Russian passenger plane in Egypt’s Sinai peninsula as well as the December 2015 attack in San Bernardino, California, and the assault in June on a nightclub in Orlando, Florida, also happened under al-Adnani’s watch.

Over 1,800 people were killed and 4,000 wounded in attacks overseen by al-Adnani, said a U.S. official, speaking on condition of anonymity because he was no authorized to speak to reporters.

He also oversaw attacks in Baghdad that killed more than 300 people, carried out in retaliation for the Iraqi military’s recapture earlier this year of Fallujah, said two Iraqi officials, who spoke on condition of anonymity in line with regulations.

Al-Adnani, whose real name was Taha Sobhi Falaha, was born in the northern Syrian province of Idlib.

Details of his militant career emerged in on-line eulogies and statements by the Islamic State group and its supporters.

Al-Adnani was one of the first to pledge allegiance to Abu Musab al-Zarqawi, who founded the precursor of IS after the U.S.-led invasion of Iraq. He rose to be one of his most trusted advisers, and supporters say that al-Zarqawi once told al-Adnani: “Don’t consult me, just brief me.”

His death, like al-Zarqawi’s in a 2006 U.S. airstrike, will only empower al-Adnani’s “soldiers,” the militants said in announcing al-Adnani’s death.

Al-Adnani was a learned student of Islam, becoming strictly observant at a young age. He was a devout reader of religious books, eventually writing his own explainers about Islamic laws and traditions. He leaves behind a wealth of recorded messages with his distinct nasal voice reciting poetry in classical Arabic. His supporters said he was so zealous about teaching that there were times when he would hold as many as 14 classes a night.

He was arrested frequently by the Syrian government, including in the border town of Boukamal as he headed for the first time to Iraq in the early 2000s. He was imprisoned by the Americans twice in Iraq, spending six years in prison, held along with al-Zarqawi’s strongest backers.

In Iraq, al-Adnani set up a military camp in Haditha, west of Baghdad, where he trained new recruits. He was a religious judge in Iraq’s militant-held western Anbar area before taking on the role of the spokesman for IS’s precursor organization, reflecting how trusted he had become as a veteran member of the group.

In late June 2014, al-Adnani formally announced the formation of a caliphate, or Islamic state, stretching across parts of Syria and Iraq, under al-Baghdadi’s leadership and demanded allegiance from Muslims worldwide.

A powerful orator, he went on to become the voice of IS. He released numerous audio files online in which he delivered fiery sermons urging followers to kill civilians in nations that supported the U.S.-led coalition against the group.

Earlier this year, he called for massive attacks during Ramadan, a call that translated into the bloodiest Muslim holy month in recent memory. The Iraqi officials said he was believed to be personally responsible for al-Baghadadi’s policy of remaining in deep hiding, and that he chaired meetings on al-Baghdadi’s behalf.