Revealed! The shadow lawmakers no one knows exists - The Horn News 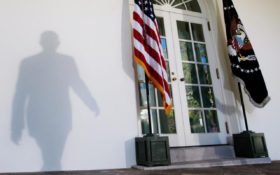 President Donald Trump has promised to drain the swamp, but that task is harder than anyone can imagined… because no one knows how big it is.

That’s not an exaggeration. Literally, no one has a real number for how big our government actually is.

In fact, the federal government is so bloated, there exists paid, unelected lawmakers operating in the shadows… and we’re not sure how many.

There are estimates. There are guesses. But no one knows for sure.

The only thing we know for certain is these regulators and rule makers – what I call “shadow lawmakers” – are making the U.S. government bigger and more complicated by the hour.

Everyday American voters never get a say on these shadow lawmakers, of course. Instead, all Americans like you and I get is an enormous tax bill.

How big is the bill? According to non-profit public policy organization Competitive Enterprise Institute (CEI), regulation compliance costs somewhere around $1.863 Trillion per year.

That’s an average of $14,974 per household. Money you’re spending to pay for this.

Because the problem is HUGE.

How many federal agencies are we talking? The answer depends on whom you ask.

According to CEI, “The Administrative Conference of the United States lists 115 agencies in the appendix of its ‘Sourcebook of United States Executive Agencies.’”

But that’s just an estimate. There is no authoritative list of government agencies.

In fact, if you ask six different government sources, you will get six different answers on how many agencies there are. The numbers range from 60 to nearly 500.

For example, the Office of the Federal Register (OFR), which maintains the “Daily Journal of Federal Documents” lists 440 federal regulating agencies.

On Wednesday alone, 84 documents from 41 different agencies were filed with this registry. There were 73 notices (notices are like FYIs to the public regarding regulations), seven new proposed rule changes, eight new regulations, and one presidential document.

This is just an uneventful, single day of government activity.

It gets worse when one examines the sheer number of regulations that already exist.

Our federal government writes nearly 8,000 new regulations annually, according to Regulations.gov, which itself tracks 300 federal agencies. (notice the number differences?)

Now, consider what regulatory agencies do. They intact regulations for laws passed by Congress.

American voters did not elect government regulators; they only pay regulator salaries.

And our federal government has no real idea how many agencies we have or how many regulators are writing these rules on our behalf.

Congress just throws money into the bloated machine and hopes for the best.

Still question how an unlikely billionaire businessman from New York became president? I think we have our answer.

Because he was the only one saying, “Drain the swamp!”

It’s time to starve the beast that is the U.S. government… before it’s too late.

— Melanie T. Collins is a contributing writer for The Horn News and host of the “MoneyTalk with Melanie” show. She is an outspoken conservative with a passion for small government and finance.