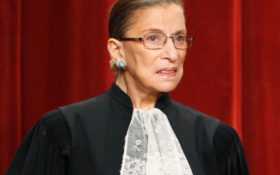 Supreme Court Justice Ruth Bader Ginsburg revealed her upcoming plans — and it is not what conservatives had hoped for.

The 85-year-old Justice revealed that she hopes to remain on the court’s bench for another five years.

“My senior colleague, Justice John Paul Stevens, he stepped down when he was 90, so think I have about at least five more years,” said Ginsburg.

She described herself as a “flaming feminist” at a New York City event over this weekend.

When asked her thoughts on term limits or retiring, she stated, “You can’t set term limits, because to do that you’d have to amend the Constitution,” Ginsburg said. “Article 3 says … we hold our offices during good behavior.”

“And most judges are very well behaved,” she added, to laughter.

Her comments were made after seeing a play about the late Justice Antonin Scalia.

And she expected that her announcement would calm the nerves of many liberals who are concerned that President Donald Trump would potentially nominate another justice for a seat in his first term.

Ginsburg, who was originally nominated in 1993, has been a consistent liberal on the highest court.

“My dear spouse used to say the true symbol of the US is not a bald eagle,” she said at the event. “It is the pendulum,” adding that “when it goes very far in one direction you can count on it coming back.”

Do you want to see Ruth Bader Ginsburg retire? Share your opinions below —

Would you like to see Ruth Bader Ginsburg retire?