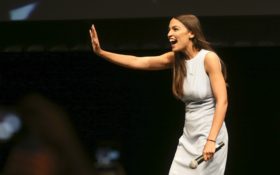 New York City is suffering through the worst spike in coronavirus cases ever — but a couple of startling photos that leaked over the weekend show Rep. Alexandria Ocasio-Cortez, D-N.Y., doesn’t seem to know.

Or, more likely, she doesn’t care.

On Sunday, she was out drinking again at a drag bar. And there’s not a mask in sight.

EXPOSED: AOC is STILL lounging it up in Florida, in large crowds and maskless. This time at a Drag Queen bar in Miami.

Rules for thee but not for me. pic.twitter.com/8l30GFA0GT

“For those of you with zero sense of humor: the whole point of this post is to expose hypocrisy,” the reporter who first spotted Ocasio-Cortez, Brendon Leslie, wrote on social media. “We don’t actually care she’s maskless. We care she fear mongers about Florida but then has the audacity to vacation here.”

Gov. Ron DeSantis, R-F.L., and his social media team jumped on the viral photos to welcome Ocasio-Cortez and said they hope AOC is “enjoying a taste of freedom here in the Sunshine State.”

We hope you’re enjoying a taste of freedom here in the Sunshine State thanks to @RonDeSantisFL’s leadership. https://t.co/AU0Khspu8P

Despite leaving her home district during New York’s worst coronavirus spike, Ocasio-Cortez fired back at critics over the weekend.

While partying maskless all weekend over 1,000 miles from home, she claimed that it was DeSantis — not her — that had actually abandoned his constitutes over the past few weeks.

“Hasn’t Gov. DeSantis been inexplicably missing for like two weeks?” she wrote Saturday. “If he’s around, I would be happy to say hello. His social media team seems to have been posting old photos for weeks In the meantime, perhaps I could help with local organizing. Folks are quite receptive here.”

DeSantis took two weeks off over the holidays to attend his wife’s cancer treatments.

“AOC is just a complete hypocrite. She does it, the Democrats do it, the left media does it. They watch Joe Biden go and buy ice cream every day, but then they attack Republicans every moment they can,” Sen. Rick Scott, R-F.L., told Fox News on Saturday.

“AOC wants to shut down New York and then she wants to come down here.”

“Maybe she’s doing a fact finding mission to see what freedom is like,” Scott concluded.