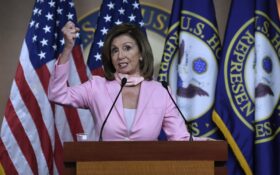 Democrats are in a hurry to flee the Capitol, and not just for their Christmas vacations.

Some are planning to split for good.

Rep. Peter DeFazio (D-Ore.) this week became the 19th House Democrat to announce his retirement, part of a wave of longtime lawmakers who’ve announced they won’t run in next year’s crucial midterm election.

And that’s considered a key signal the balance of power is about to shift to the right.

“These Democrats spent decades accumulating power and seniority in Congress,” Mike Berg, a spokesman for the National Republican Congressional Committee, told The New York Times in October. “They wouldn’t give up that power if they felt Democrats were going to hold the majority.”

Democrats are right now clinging to a slim majority. Republicans need to flip just a third of the seats of those outgoing lawmakers to retake the majority.

Odds are that they’ll gain far more as all signs point to a rout in the making – in large part due to President Joe Biden’s lagging, volatile approval ratings, especially among independent voters.

“Independent voters are like the ‘check engine’ light in American politics: when that light goes on, you are in trouble,” wrote Amy Walter of the Cook Political Report. “Right now, that light is blinking red. That’s a terrible sign not just for Biden but for Democrats writ large.”

She noted that while Biden’s approval fell 6 points among Democrats and Republicans, it’s in free fall with independents – plunging from 53 percent in February to just 37 percent right now.

And that… more than anything else… could be the surest sign of a looming “wave” election, and why so many Democrats are eager to quit before they’re unceremoniously booted from office by voters instead.

“If you want to see a political wave forming a year before an election, watch the retirements,” The Atlantic noted in a 2018 report.

In 2010, as the Tea Party movement picked up steam and it was clear voters were about to send a midterm message to then-President Barack Obama, 17 Democrats retired rather than face reelection.

They lost 63 seats – and the majority.

In 2018, as the “resistance” to Donald Trump grew and it was clear Democrats would retake the House, 39 Republicans left office. If you give 13 a pass for leaving to seek higher office, that’s still 26 GOP retirements.

Democrats gained 40 seats – and the majority.

There’s no telling how many seats will flip in 2022.

The Center for Politics said that if Republicans are up by 10 points on the generic ballot – a poll in which voters are asked not about candidates, but whether they plan to vote for a Democrat or a Republican – they can expect to gain 32 seats.

The most recent ABC News/Washington Post poll has the GOP up by 7 points, or very close to that number.

In other words, it’s increasingly likely that Democrats will be back in the minority once the dust settles… and they might be there for a while.

The redistricting effort due to the latest U.S. Census is already shoring up Republican seats as well as creating safe new districts for GOP candidates, especially in Texas, which gained two seats.

“They’re really taking a whack at competition,” Michael Li, a redistricting expert at the Brennan Center for Justice, told the Times. “The path back to a majority for Democrats if they lose in 2022 has to run through states like Texas, and they’re just taking that off the table.”

And that could put the GOP in the driver’s seat as the nation heads to the next presidential election in 2024.