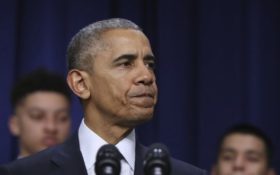 Former President Barack Obama was furious at former Secretary of State Hillary Clinton when he realized Donald Trump was going to win.

According to a bombshell updated to the book, “Obama: The Call Of History’ by The New York Times chief White House correspondent Peter Baker, Obama was enraged that the American people had “turned on him” and destroyed his legacy.

It started when Florida began to swing for Trump.

“Huh,” Baker wrote that Obama said. “The results in Florida are looking kind of strange.”

“By the end of the evening, the unthinkable had happened,” the book said. Obama was left so stunned, he couldn’t even watch the results come in.

Instead, he tried to watch movies in the White House theater while he gritted his teeth.

Obama told his adviser Valerie Jarrett the election was a “personal insult” to him. “This stings … this hurts,” he said.

“To Obama and his team,” Hillary failed because she “could not translate his strong record and healthy economy into a winning message.”

It wasn’t over on election night, Baker wrote.

Obama suffered violent mood swings and “multiple emotional stages” — at times he “flashed anger” that the American voter had rejected his legacy.

In private, Obama ranted to his aides that Trump was a con-artist straight out of Mark Twain’s Huckleberry Finn. He compared himself to Michael Corleone from “The Godfather” and complained he was being forced to hand over power to someone intent to destroy his legacy.

“As Obama saw it he ‘almost got out’ of the White House unscathed just like the mob boss nearly survived without being whacked,” The Daily Mail reported.

[MUST READ] Obama is in VERY big legal trouble