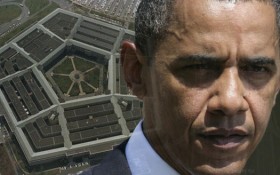 President Barack Obama’s administration promised transparency from the beginning. But a recently discovered study, hidden from the public by the Pentagon, proves his administration is not only secretive but also more fiscally irresponsible than most administrations before him.

Recent interviews and memos obtained by The Washington Post reveal an internal investigation at the Pentagon that discovered $125 billion of the defense budget is going to waste. Instead of logically cutting the budget and reallocating the funds to a department in need, the Pentagon buried the study in order to maintain the outlandishly large budget it currently receives.

The purpose of the study, which was produced by the Defense Business Board and completed in January 2015, was to discover ways to make the administrative side of the Pentagon work more efficiently, and to then apply any savings that amounted to combat power.

A great idea in theory, but when the investigation turned up more potential savings that anticipated, Pentagon officials quickly moved to discredit the results. These high ranking officials feared that if the massive waste was revealed, Congress would cut their budget even more.

The study outlined how the Defense Department could easily save the wasted funds, referring to the overwhelming amount of individuals employed to fill administrative duties.

“The plan would not have required layoffs of civil servants or reductions in military personnel. Instead, it would have streamlined the bureaucracy through attrition and early retirements, curtailed high-priced contractors and made better use of information technology,” The Washington Post reported.

The Pentagon back-office bureaucracy employs 1,014,000 people to support 1.3 million troops on active duty. This department is eating up 23% of the total defense budget.

That’s an astounding portion of the money intended to defend our nation that’s funding desk jobs.

Multiple Pentagon leaders reportedly feared the study would devalue their claims that previous budget cuts resulted in a lack of funds for the military. To protect the integrity of their complaints, they gutlessly imposed security restrictions on information from the study and removed it from the Pentagon website.

President-Elect Donald Trump has reiterated his goal to cut spending and improve our economy, and the revelation of the Pentagon waste could be a great place to start.

He has promised to build the United States military, and this study shows the funds he needs could already be within the defense department budget.

Had Pentagon officials followed through with the suggestions of the study, the $125 billion in waste could have been reallocated for troops, weapons, and rebuilding the nuclear arsenal.

Deputy Defense Secretary Robert Work, who ordered the study, told the post that the plan laid out by the report was “unrealistic.”

The military faces the sad truth of never receiving these funds, due to the 2011 Budget Control Act. The act outlines $113 billion in budget cuts for the Pentagon over the next four years, unless Trump and Congress step in and agree to a long-term spending deal by October.

This would place a lot of monetary responsibility in the hands of Trump’s nominee for defense secretary, retired Marine Gen. James Mattis, according to the Post.

This shady cover up is going to create more work for the incoming administration, further proving that Obama’s administration never followed through on their promise of transparency, and are failing to support a successful transition of power.