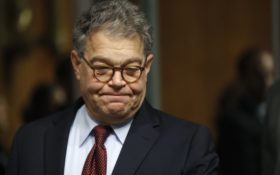 All the sexual harassment stories making headlines might be just the tip of the iceberg as an even BIGGER scandal is getting set to explode in Washington.

And this one could take down some of the biggest names in American politics across party lines.

Turns out lawmakers and their staff have a secret system set up to HIDE their sex crimes and PAY OFF victims in exchange for silence.

This ugly system has led to millions in payments in recent years.

And that slush-fund money… every last cent of it… is coming out of YOUR pocket.

“The Al Franken story is attention-grabbing,” Bill Kristol of the Weekly Standard wrote on Twitter. “But I think the secret House sex harassment settlements – authorized by whom, using what legal and fact-finding processes, known to whom else? – have the potential to be more explosive. And have there been no similar cases in the Senate?”

Kristol is referring to the Office of Compliance, which uses tax dollars to fund settlements.

The office admitted this week that it has paid out $17 million across nearly two decades.

Not all of that money has gone to pay off victims of sexual harassment. The office takes care of complaints for other forms of harassment as well, including religious and ethnic discrimination, and has so far refused to break down how much it paid out and for what.

But we know, for example, that this year alone the office coughed up nearly $1 million to settle eight cases.

Rep. Jackie Speier, a California Democrat, blew the lid off the scandal this week, revealing details of the secretive slush fund in a series of interviews and in testimony in Congress.

Last month, Speier came forward and said she was the victim of a sexual assault on Capitol Hill herself when she was a young congressional staffer. She told CNN that a chief of staff “held my face, kissed me, stuck his tongue in my mouth.”

The incident took place some 40 years ago.

But Speier said this week that it’s still a problem today, and not just among staffers.

“In fact, there are two members of Congress, Republican and Democrat, right now, who serve, who have not been subject to review, but have engaged in sexual harassment,” Speier said before the House Administration Committee on Tuesday morning.

She didn’t name names, but said she has heard of victims “having their private parts grabbed on the House floor.”

Speier wasn’t the only one speaking out.

Rep. Barbara Comstock, a Virginia Republican, said one lawmaker exposed himself to a female aide sent to drop off something at his home. He answered the door in a towel, invited her in and “decided to expose himself,” she said.

These incidents continue to happen. And thanks to that taxpayer-funded piggy bank and an archaic system that critics say protects the abusers, lawmakers can quietly settle the cases without anyone ever knowing.

Not even the people paying the bill.

Lawmakers on both sides of the aisle say it’s time to change that.

“Personally, I find this unacceptable,” said Rep. Bradley Byrne (R-Ala.), according to NPR.

Byrne, who was employment attorney before becoming a lawmaker, is demanding changes.

“If a member of Congress settles a claim as the harasser or is found liable as the harasser, it is my belief the member should be personally liable or required to repay the Treasury for such damages,” he said.