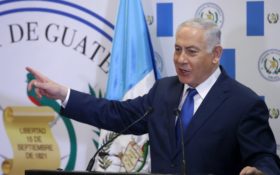 Most of the protesters killed this week by Israeli fire along the border with the Gaza Strip were members of Hamas, the militant group said Wednesday, an assertion that deepens the starkly different narratives on both sides over the deaths.

“It was clear to Israel and now it is clear to the whole world that there was no popular protest. This was an organized mob of terrorists organized by Hamas,” said Israeli Foreign Ministry spokesman Emmanuel Nahshon.

In an interview with Baladna TV, a private Palestinian news outlet that broadcasts via Facebook, senior Hamas official Salah Bardawil said 50 out of the nearly 60 protesters killed Monday were Hamas members, with the others being “from the people.”

Bardawil did not elaborate on the nature of their membership in the group. For Israel, though, it was enough to cement its narrative.

Prime Minister Benjamin Netanyahu said Israel had tallied similar numbers to Hamas and “won’t let those who call for our destruction to breach our borders and to threaten our communities.”

Organizers say the wave of border protests is meant in large part to break a decade-old blockade imposed by Israel and Egypt and pressure Israel to ease its restrictions. Since the Hamas-led protests began March 30, more than 110 Palestinians have been killed and more than 2,500 wounded by live fire, Hamas claims.

The weekly protests peaked on Monday when about 40,000 angry Gaza residents descended on the border area. Smaller groups of protesters broke away and rushed the border fence, burning tires, throwing stones or hurling firebombs. Some tried to attack the border fence with bombs and used rifles to attack Israeli defenders.

Israeli snipers, perched behind sand berms, opened fire from the other side of the fence, killing 59 Palestinians and wounding hundreds.

Images of the protesters being whisked away in stretchers amid the tear gas contrasted sharply Monday with jubilant scenes of the opening of the U.S. Embassy in Jerusalem by a high-powered American delegation and Israeli leaders. Hardly a mention was made of the border violence, only about an hour’s drive away.

The Israeli army has defended its actions. It points to the violent history of Hamas, an internationally recognized Islamic terror organization behind the shootings and bombing attacks against Israeli forces. Israel claims the terror organization is using protesters as human shields to cover their attacks and as a way to gain sympathy from the liberal media.

On Tuesday, the army released a video that appeared to show protesters detonating several explosions near the border. It also said its forces had killed a squad of Hamas gunmen who opened fire at troops.

Lt. Col. Jonathan Conricus, a military spokesman, said 14 of those killed Monday were actively involved in carrying out attacks.

Omar Shakir, the local director for Human Rights Watch, said that under international law, Israel cannot use lethal force against unarmed protesters, regardless of their identity or possible affiliation with a militant group.

“These individuals that were killed, regardless of their affiliation or membership, were engaged in a demonstration in which they did not pose an immediate threat to life and were gunned down, and that’s what’s relevant,” Shakir said.

Israel says it uses live fire only as a last resort. Snipers are supposed to aim at protesters’ legs and can shoot only with approval from a commander.

Hamas’ statement comes at a moment when Israel finds itself largely isolated over its response to the protests.

The U.S. was among the few countries that came to Israel’s defense, backing its right to protect its border on the same day that it countered international disapproval of moving its embassy from Tel Aviv to Jerusalem. The Palestinians, who seek east Jerusalem as capital of their hoped-for state and vehemently oppose the U.S. move, recalled their ambassadors to four European countries that had supported it.

On Wednesday, Guatemala followed the U.S. lead, festively opening its new Jerusalem mission with Guatemalan President Jimmy Morales saying his country was bringing a message of “love, peace and fraternity” to Israel. Paraguay said it also will move its embassy to Jerusalem. Romania, the Czech Republic and Honduras have said they are considering doing the same.