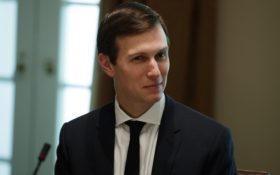 While the liberal media continues to speculate that he helped President Donald Trump’s campaign collude with Russia, they are ignoring one major fact that proves Trump is innocent.

Kushner says he received a “random email” during the presidential campaign from someone claiming to have Trump’s tax returns and demanding ransom to keep the information secret.

He interpreted the email as a hoax and says it came from a person going by the name “Guccifer400.” The name is an apparent reference to Guccifer 2.0, an anonymous hacker who has claimed responsibility for breaking into the Democratic National Committee’s computer systems.

But the media is ignoring a major question that needs to be asked.

How would Trump collude with the Russian government to hack Hillary Clinton’s campaign, if the same hacker was also targeting the Trump campaign?

Kushner says the emailer demanded payment in Bitcoin, an online currency. He says he showed the email to a Secret Service agent, who told him to ignore it.

Kushner disclosed the details of the email ahead of a closed-door interview Monday with a Senate committee investigating Russia’s meddling in the 2016 election.

He denied Monday that he colluded with Russians in the course of President Donald Trump’s successful White House bid, declaring in a statement ahead of interviews with congressional committees that he has “nothing to hide.”

The 11-page statement , released hours before Kushner’s closed-door appearance before the Senate intelligence committee, details four contacts with Russians during Trump’s campaign and transition. It aims to explain inconsistencies and omissions in a security clearance form that have invited public scrutiny.

“I did not collude, nor know of anyone else in the campaign who colluded, with any foreign government,” Kushner said in the prepared remarks in which he also insists that none of the contacts, which include meetings at Trump Tower with the Russian ambassador and a Russian lawyer, was improper.

In speaking to Congress, Kushner — as both the president’s son-in-law and a trusted senior adviser during the campaign and inside the White House — becomes the first member of the president’s inner circle to face questions from congressional investigators as they probe Russian meddling in the 2016 election and possible links to the Trump campaign.