[Revealed] Elizabeth Warren in BIG trouble... from a radio DJ!? - The Horn News 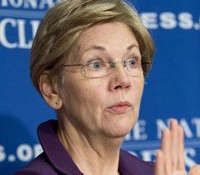 Massachusetts Sen. Elizabeth Warren’s unfounded claims to be of Cherokee ancestry have dogged her political career — and one star radio host in New England has a plan to prove Warren is an untrustworthy liar.

He’s going to have her DNA tested and will reveal the results to the public — with or without Warren’s consent.

It’s not the first time he’s tried it.

“Boston radio host Howie Carr revealed Friday that he attempted six years ago to obtain a DNA sample from a pen cap she removed with her teeth before she signed a book—and said he plans to try it again unless she agrees to take a test voluntarily,” The Washington Times reported.

Warren signed a copy of the American Indian cookbook “Pow Wow Chow”, which she submitted alleged “Cherokee family” recipes for publication, during her 2012 Senate run.

The Massachusetts politician’s submissions, it should be noted, were reportedly “word for word” plagiarisms of famous French chefs and New York Times recipe ideas.

She unwittingly signed a copy for one of Carr’s aides, taking the pen cap off with her mouth before signing the plagiarized work. Carr then submitted the pen cap for DNA testing, but claimed there wasn’t enough saliva for a result.

He’s not finished, though. Leading up to Warren’s reelection bid, Carr has vowed to get Warren’s DNA and prove once-and-for-all that she was lying about her heritage.

“I have a backup plan,” Carr said in an op-ed for The Boston Herald. “But it will involve some sneaky stuff, which I’ve tried before.”

He’s not alone. A Cherokee genealogist has come forward this month and demanded Warren stop her “impossible” claims. Warren continues to claim Indian ancestry, but refuses to take a DNA test to prove her claims.

Warren also denies she’s used her false claims of Indian ancestry to advance her career, despite the fact that she promoted herself as a ‘minority hire’ while a professor at Harvard Law.

Hopefully, Carr can answer this question once and for all.