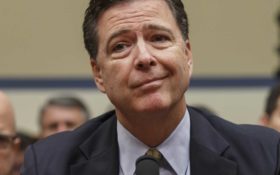 Democrats are sticking to their guns Friday, loudly insisting that the Russian government was behind the email hacks that revealed numerous scandals involving former Secretary of State Hillary Clinton and her presidential campaign.

It’s a narrative the mainstream media has eagerly repeated since the election of President-elect Donald Trump — and the Democratic National Committee was just caught lying about it!

The FBI has come forward and admitted the DNC wouldn’t let them properly investigate, according to officials.

A senior law enforcement official said during the investigation, the FBI repeatedly stressed to DNC officials the importance of obtaining direct access to the servers “only to be rebuffed until well after the initial compromise had been mitigated.”

The official admitted the FBI had to rely on a “third party” for their investigation.

“This left the FBI no choice but to rely upon a third party for information. These actions caused significant delays and inhibited the FBI from addressing the intrusion earlier.”

The DNC had previously stated the FBI never asked for access.

This isn’t the first time the relationship between the DNC and the FBI has been strained. Multiple top Democrats — including Senate Minority Leader Harry Reid — have repeatedly blamed FBI Director James Comey for Clinton’s loss to Trump in the 2016 election.

Meanwhile, the nation’s top intelligence officials are meeting with Trump on Friday to discuss the information they have on the hacking investigation.

The officials — Director of National Intelligence James Clapper, CIA Director John Brennan, and Comey — say they are ready to point to multiple motives for Moscow’s alleged meddling as they brief Trump on their classified report Friday in New York.

A declassified version of the report is expected to be released to the public at some point, giving the American people the access to the truth — not the filtered narrative pushed by the DNC.

Since winning the election, Trump has repeatedly questioned intelligence officials’ assessments that Russia was behind the hacking of the DNC and individual Democrats like Clinton campaign chairman John Podesta.

Trump remained dubious about the assertion even on the eve of his intelligence briefing.

So how and why are they so sure about hacking if they never even requested an examination of the computer servers? What is going on?

Sean Spicer, whom Trump has chosen as White House communications director and press secretary, said the billionaire business will go into Friday’s meeting “prepared to listen and understand how they got to the conclusions.” Asked on ABC’s “Good Morning America” if Trump would have an open mind, Spicer replied, “100 percent.”

“The president-elect, I think, has a healthy skepticism on everything,” the spokesman said, adding that “a rush to judgment is not in the country’s best interest.”

“I think the idea that he’s approaching this in a very logical, very methodical way … is the right way to go about it,” Spicer added.

Ahead of the briefing, Trump moved to fill out his own intelligence leadership team, tapping former Indiana Sen. Dan Coats to lead the Office of the Director of National Intelligence, according to a person with knowledge of the decision.

Coats served as a member of the Senate Intelligence Committee before retiring from Congress last year. If confirmed by the Senate, he would oversee the umbrella office created after the 9/11 attacks to improve coordination of U.S. spy and law enforcement agencies. The person with knowledge of Trump’s decision, as well as others who spoke to The Associated Press about intelligence matters involving Trump, were not authorized to discuss the matters publicly and spoke on condition of anonymity.

Coats, a 73-year-old Capitol Hill veteran, served eight years in the House before moving to the Senate in 1989 to take Dan Quayle’s place when he became vice president. He stayed in the Senate until 1998, then left to become a lobbyist. After a stint as ambassador to Germany under President George W. Bush, he returned to Indiana for a Senate comeback bid in 2010. He did not seek re-election last year.

Coats was a harsh critic of Russia and pushed the Obama administration to punish Moscow for its annexation of Crimea in 2014. When the White House levied sanctions, the Kremlin responded by banning several lawmakers, including Coats, from traveling to Russia.

Coat’s nomination is likely to quell concerns that the president-elect is seeking a sweeping overhaul of intelligence agencies. Trump’s transition team has also been considering ways to restructure agencies to streamline operations and improve efficiency. Transition officials have been looking at changes at both ODNI and the CIA, but those plans are said not to be aimed at gutting the intelligence agencies or hampering their capabilities.

The person with knowledge of the discussions said they reflected the views of intelligence officials who have told Trump’s team that there is room for streamlining within the multi-agency intelligence community.

“There is no truth to this idea of restructuring the intelligence community infrastructure. It is 100 percent false,” Spicer said.

Comment “Busted!” below if you’re glad the DNC was caught lying… again!