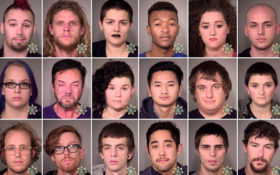 A week of violent protests in Oregon resulted in over a million dollars in damages after young Americans took to the streets to express outrage over the Nov. 8 election of President-Elect Donald Trump.

An election most of them didn’t even bother to vote in.

New information has revealed that most of these temper tantrum throwers didn’t even bother to take the time to head to the ballot box. In fact, only 34 of the 112 protesters arrested during the mayhem in Oregon actually bothered to head to the polls in the state.

Millennials are so upset with the outcome of an election, they are taking to the streets to assault officers and destroy property in protest — and they didn’t even participate!?

Local Portland news station KGW collected the names and ages of those arrested by the Portland Police Bureau and compared them to state voter logs by Multnomah County Election officials.

What they found was surprising: Of the 112 people arrested during the riots, 39 were registered in Oregon but didn’t vote in the election. Another 35 weren’t even registered to do so in the state, while four were younger than 18-years-old.

That means just 30% of these arrested actually exercised their right to vote.

While protests erupted all across the country about the results of an election which can no longer be changed, Portland’s quickly became the most violent.

The unruly protests have lasted for six days and resulted in at least $1 million in damages.

Store front windows have been smashed and at least one police cruiser was defaced with profanities. Officers were forced to defend themselves with tear gas and flash-bang grenades from “burning projectiles” thrown in their direction over the weekend. One protester was shot by another alleged protester in a drive-by shooting early on Saturday.

Even President Barack Obama alluded to the unnecessary nature of the protests in his first press conference since the election. “I think it’s important for us to let him make decisions. The American people will judge over the course of the next couple of years whether they like what they see.”

But apparently it’s easier to throw temper tantrums from the sidelines than to bother going to the polls where it really matters.

The crybaby epidemic isn’t limited to Oregon, either. For example, 49ers quarterback Colin Kaepernick — who created huge controversy this fall when he refused to stand for the national anthem – also didn’t bother to register to vote. While he had no problem cashing million dollar checks while taking a grand political stand on the football field, he couldn’t make it to the polls to take one that would actually count.

In fact, nearly half of the country failed to show up to the polls on Election Day… but that hasn’t stopped dozens of riots from erupting across the country

It’s time these knuckleheads stopped blaming others, and started looking in the mirror.