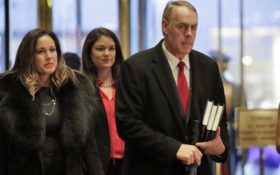 Rep. Ryan Zinke of Montana made no secret of his ambitions to join a Donald Trump Cabinet, yet his nomination as Interior secretary is in some ways an unlikely fit for the retired U.S. Navy SEAL.

Zinke, 55, was an early supporter of the president-elect and publicly expressed his interest in a Cabinet post when Trump visited Montana in May.

Like other Western states, Montana’s wide-open, rugged landscape has a huge federal presence. The Interior Department and other U.S. agencies control almost a third of its land and even more of the underground “mineral estate” that holds vast amounts of coal, oil and natural gas.

As with several other Trump Cabinet nominees, Zinke has advocated for increased energy drilling and mining on those lands and expressed skepticism about the urgency of climate change.

The Republican lawmaker also has been a vocal supporter of keeping public lands in the government’s hands. That’s a central political issue in Montana, where hunting and fishing access is considered sacrosanct.

The president-elect’s son Donald Jr. is an avid hunter and was in Montana on a hunting trip last month. That may have given Zinke an advantage over another lawmaker Trump was said to have considered for the Interior post, Rep. Cathy McMorris Rodgers, R-Wash. She wrote on Facebook Tuesday that it had been an “honor” to be invited to meet with Trump.

Zinke met with Trump on Monday in New York, according to two people with knowledge of the matter. A person close to Zinke confirmed the Tuesday offer.

He hadn’t yet accepted when he left Tuesday for his home in the mountain town of Whitefish, Montana, according to two of those people. All three insisted on anonymity because they were not authorized to discuss the transition process publicly.

Energy development, land management and hunting fall under the Interior Department’s jurisdiction. However, those were second-tier issues for Zinke during his successful re-election campaign this fall against Democrat Denise Juneau.

In interviews with The Associated Press during that campaign, Zinke repeatedly identified his top priorities as national security, more thorough vetting of refugees to screen out terrorists, the repeal of the Affordable Care Act and improving the U.S. economy.

Only after those did he list his desire to increase coal mining and oil and gas exploration, protect public lands and provide more resources for American Indian tribes, another Interior responsibility.

News of his selection was welcomed by Montana’s Confederated Salish and Kootenai Tribes and at least one conservation group, Backcountry Hunters and Anglers. The president of the Missoula, Montana-based hunting group, Land Tawney, called Zinke a “potential ally” in the effort to balance energy development with preservation.

“There are places too important for drilling, and in other places we can do phased development. Mr. Zinke understands that,” Tawney said.

Other groups slammed the selection. The Northern Plains Resource Council accused Zinke of “shortchanging the public” with his opposition to pending Obama administration moves to reform the federal energy leasing program.

Zinke spent 23 years as a Navy SEAL, serving in Iraq, Kosovo and elsewhere. He was awarded two Bronze Stars for combat missions in Iraq. He currently serves on the House Natural Resources and Armed Services committees and describes himself as “a steadfast advocate for Montana veterans and military personnel and families.”

He made an unsuccessful 2012 run for Montana lieutenant governor before shifting his ambitions to Congress when former Rep. Denny Rehberg decided to take on Sen. Jon Tester, a Democrat. Zinke has been considering his own challenge to Tester in 2018.

Zinke has raised doubts about climate change as “unsettled science.” But he’s also said that “something’s going on” with the climate and that an energy strategy that includes renewable sources such as wind and solar would be prudent.

Montana boasts the largest coal reserves in the nation. Zinke has warned environmentalists and the Obama administration that to take coal out of the energy mix would be “a disaster.”

“I don’t agree with keeping it in the ground,” he said in a debate before his re-election.

Democrats have attempted to label Zinke as a radical who would sell off federal lands to private interests or transfer them to state control. Zinke has adamantly denied the charge, which was based on a pledge he’d signed years earlier.