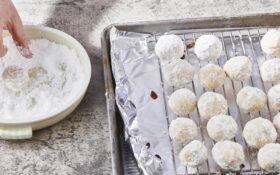 The Rhode Island Department of Health says it was not able “to definitively confirm or refute the presence of Santa” in a young girl’s home after she requested to have a partially eaten cookie and a couple of gnawed-on carrot sticks tested for DNA to see if Santa Claus is real.

The department tweeted on Monday that “we all agree that something magical may be at play.”

The department said it found no complete matches to anyone in the Combined DNA Index System but said there was a partial match “to a 1947 case centered around 34th Street in New York City,” referring to the movie “Miracle on 34th Street.” It said it would need more DNA samples “from other known Santa encounters to make a definitive match.”

🎅The results are in… pic.twitter.com/0ZakM5ph36

The “good news” is that the lab did find the presence of DNA closely matching Rangifer tarandus, known as reindeer, when testing the carrots, the department said.

The girl, a Cumberland resident, had sent the cookie and carrot sticks to the town’s police department to ask if they can be tested for DNA, Chief Matthew Benson said on Friday. Benson forwarded the “evidence” to the state’s Department of Health-Forensic Sciences unit for analysis.