"Resign!" Nikki Haley has a message for Kamala Harris - The Horn News 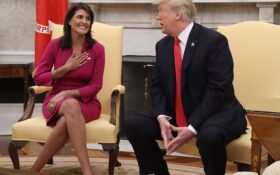 Since the 2020 election, Haley has regained her public profile with her full-throated criticisms of President Joe Biden.

She went on The Guy Benson Show Wednesday, a conservative talk radio program. She took issue with Biden’s press conference about Ukraine… and she issued a shocking demand.

“I think it’s horribly embarrassing what has happened. I have to say it was absolutely cringeworthy, listening to Biden’s press conference.” “You never show your cards, especially when you don’t have any. And that’s literally what he did: to refer to whether there’s a ‘minor incursion’ or not.

“I know, having dealt with the Ukrainians and everybody else, that they had to have been mortified… It was basically giving a green light to let Russia know, ‘You can do a little bit, but you can’t do a lot.’ Well, that’s like saying, ‘You can go and you can attack Florida; just don’t attack the rest of the country. Regardless of what you do, it’s bad, and you have to treat it that way. We’re suffering.”

However, Haley dismissed an all-out war as an unlikely possibility.

“Putin has had some popularity problems,” she said. “I don’t think his intent is to go to war. It would not be popular.”

Haley reiterated her point. Instead of war, she called for sending missiles to Ukraine, in order to deter Russia from interfering.

Then, she dropped a bombshell.

“Honestly, for the good of our country, if Biden loved our country, he would step down and take Kamala with him,” she said.

Benson interrupted, “Ambassador Haley, did you just call on the president and vice president to resign?”

Haley simply responded, “That’s not me speaking politically. That’s me speaking as a loving person of America whose parents came here because they saw the greatness of it — the wife of a combat veteran.”

In other words, Haley probably expects Biden to remain in office. According to Haley, Biden would resign if he put America first. That’s a big “if.”

Some Twitter users pointed out that, in the event of a Biden-Harris resignation, the U.S. would get stuck with President Pelosi.

The anti-Trump critics took issue with Haley for flip-flopping in her opinion of Trump, and they continued to scaremonger about allegations of collusion between Trump and Putin.

Wow.
So now Nikki Haley is calling for President Biden to resign because of the Russia-Ukraine conflict.

Really Nikki? How dare you saying it after working for Putin’s puppet for 3 years.

I thought you’re better than this but I guess I was wrong.#NeverNikki pic.twitter.com/iUum4l0rXx