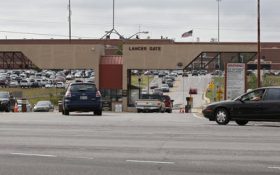 Residents of five states may be barred from boarding a commercial flight using a driver’s license beginning in 2018 because of their states’ refusal to comply with national proof-of-identity requirements.

The U.S. Department of Homeland Security confirmed Wednesday that it rejected requests from Oklahoma, Kentucky, Maine, Pennsylvania and South Carolina for an extension to comply with the federal Real ID Act. The law, passed in 2005 in response to the 9/11 attacks, imposes tougher requirements for proof of legal U.S. residency in order for state driver’s licenses to be valid for federal purposes.

Three other states— Minnesota, Missouri and Washington — were previously notified that they are not in compliance with federal law.

Twenty-three other states and the District of Columbia are in compliance, while others are under review or have been granted limited extensions, DHS reported on its website .

The 9/11 hijackers obtained valid identification cards from various states, according to the FBI, and a commission that reported on the attacks recommended the federal government develop standards for issuing identification cards as a way to help prevent terrorism and fraud.

“Starting Jan. 30, 2017, federal agencies and nuclear power plants may not accept for official purposes driver’s licenses and state IDs from a noncompliant state/territory without an extension,” DHS spokesman Aaron Rodriguez said in a statement.

Beginning in January 2018, driver’s licenses from noncompliant states will not be accepted to board a commercial aircraft within the U.S., Rodriguez said.

Among the requirements that some states have failed to meet are documentation such as Social Security numbers, retaining copies or digital images of applications and source documents, and including approved security markings on driver’s licenses.

Opposition in many states, including Oklahoma, stems from a concern the federal government is overstepping its authority and gathering too much data from its citizens.

“They’re really pressing this because it will morph into a national ID, which none of us really want,” said Rep. Lewis Moore, a Republican from Arcadia who has opposed the state’s compliance with Real ID. “That’s why the majority of the states have been fighting back and resisting. We feel like we’re getting strong-armed.”

States have been granted multiple extensions since the law went into effect a decade ago.

Jim Harper, a senior fellow at the Washington, D.C.-based CATO Institute, a libertarian leaning think-tank, said he doesn’t believe the federal government ultimately will follow through on its threat to prevent Americans from non-compliant state from boarding commercial flights.

“I think states should stay the course,” said Harper, who voiced concern about the amount of information that will be stored in the motor vehicle database, including digital copies of people’s birth certificates, social security cards and driving records. “If you compare the national security benefit to the identity fraud risk, Real ID is a loser.”

But when vendors are unable to make deliveries at military installations or citizens find out they are unable to board an airline because of a states’ refusal to comply with the law, people are going to be angry, said Sen. David Holt, an Oklahoma City Republican who worked on a compromise bill last year that passed the Senate but got held up in the House.

“The reality of these inconveniences may cause that murmur to become a roar,” Holt said.