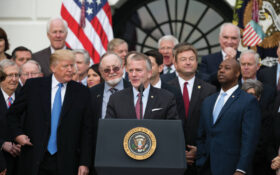 Amid mounting legal battles and allegations of irregularities in the 2020 presidential election, Republicans won a major victory on Wednesday.

Sen. Dan Sullivan, R-A.K., was projected by NBC News to have won a second term representing Alaska. The state’s three electoral votes were also announced to have been won by President Donald Trump, NBC News projected.

The results put Republicans in the driver’s seat to maintain control of the Senate, regardless of who ultimately wins the White House.

Official control of the Senate won’t officially be decided until the new year after Republicans won a seat in Alaska on Wednesday. Neither party can lock the majority until January runoffs in Georgia.

Republicans are still short of the 51 seats they need for majority control, should Biden emerge as the ultimate winner. They have a 49-48 hold on the Senate with the Alaska win, but two races in Georgia are heading to a Jan. 5 runoff.

The presidential election race in North Carolina remains too early to call. But Democratic challenger Cal Cunningham has conceded to Republican Sen. Thom Tillis in the state.

With Biden, the path to keeping Senate control is more difficult for Republicans. Should current election totals officially be certified, the vice president of the party in power on Jan. 20 will be Kamala Harris, and would be the Senate tie-breaker. That means if Republicans only have 50 seats, Democrats would control the Senate. Republicans would need 51 senators to overcome that.

The Georgia runoff elections, set for Jan. 5, are swiftly becoming a showdown over control of the chamber.

The state is closely divided, with Democrats making gains on Republicans, fueled by a surge of new voters. But no Democrat has been elected senator in some 20 years.

What are your thoughts on the presidential contest?

Should Trump concede to Democratic presidential candidate Joe Biden, who is ahead in the polls?

Or should Trump refuse to concede and continue to fight legal battles.