Republican voters: We want a fighter for Speaker - The Horn News 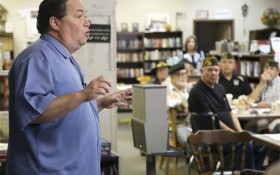 Republican voters have a message for their political party: Good riddance to the current slate of GOP leaders, and find a new speaker who will stand up for conservative values.

As he travels his southeast Texas district this week, Republican Rep. Blake Farenthold has been trying to convince his constituents that the House GOP is not in disarray.

Such exchanges in more than a dozen town hall meetings Farenthold has held this week, including Thursday at a coffee house in Wharton and a VFW hall in Bay City, underscore the pressures — and opportunities — surrounding the House Republican leadership crisis for rank-and-file conservatives like Farenthold.

Elected in 2010 along with dozens of other tea party-backed Republicans, Farenthold shares his constituents’ deep frustration with what many voters see as the half-measures and conditional victories of divided government. He agrees when voters accuse outgoing House Speaker John Boehner and his No. 2, Majority Leader Kevin McCarthy, of failing to stand up to President Barack Obama and the Democrats.

Voters see a chance to restore conservative leadership to the House and finally take the fight to Obama. Yet, even though it’s not yet clear who will replace Boehner, the budgetary deadlines looming in coming weeks raise the possibility that the next speaker could be forced into the same compromises and retreats as the current one in showdowns over must-pass legislation to keep highway projects going or to fund the government. Such an outcome could bitterly disappoint voters and cause yet more uproar in the unsettled House.

“You turn on the TV and you hear all these guys — ‘Republican Party in disarray. Turmoil in Washington.’ — I don’t think that’s the case,” Farenthold told around 50 voters who turned out early Thursday at a quirky coffee house and used bookstore in Wharton, southwest of Houston. “I think Kevin (McCarthy) did the country and the Republican conference in Congress a huge favor. He stepped back and gave us time to have a discussion.”

People in attendance asked Farenthold why Republicans didn’t shut down the government to get what they want. Boehner “came out and said ‘I’m not going to shut the government no matter what. ‘That makes him a really crappy negotiator,’ ” Farenthold replied. “We need somebody who is a better negotiator.”

In fact, House Republicans did force a 16-day partial government shutdown two years ago in an attempt to up-end Obama’s health care law. It didn’t work, but that hasn’t dampened the appetite for confrontation among some in the GOP, including the hardline House Freedom Caucus that pushed Boehner out.

Farenthold is not a Freedom Caucus member but shares its perspective on some issues. Voters want a speaker “who doesn’t cave. They saw Boehner as giving into the Democrats and not fighting for conservative principles. They want a fighter,” Farenthold said in an interview after his session at Milam Street Coffee Shop.

One man in attendance, 63-year-old Mike Harbaugh of Wharton, a Navy veteran, urged working together without retreating from GOP values.

“There’s a way that Reagan did it. You compromise without compromising your principles,” Harbaugh said, referring to former President Ronald Reagan. “Don’t ask me how he did, but he did it and it can be done.”