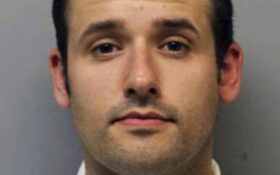 A congressional candidate in Connecticut has abruptly ended his campaign on the day of his primary election following his arrest on a domestic assault charge.

The state party says Thomas Gilmer, R-C.T., was arrested late Monday and dropped out of the race because of “the severity of the accusations.”

The state Republican Party had previously endorsed Gilmer over his primary opponent.

Wethersfield police say Gilmer was charged on a warrant with first-degree unlawful restraint and second-degree strangulation and posted a $5,000 bond.

He is expected to appear in court Tuesday. Gilmer’s campaign website was down, and he could not immediately be reached for comment.

The 29-year-old Gilmer, of Madison, was competing against Justin Anderson, of East Haddam, a lieutenant colonel in the Connecticut Army National Guard who served two combat tours in Afghanistan.

The winner of the race in November will face U.S. Rep. Joe Courtney, a Democrat who is favored to win reelection in the deep blue district spanning eastern Connecticut.